‘We were at a wedding’: On Kin Wai Yam’s Pulang 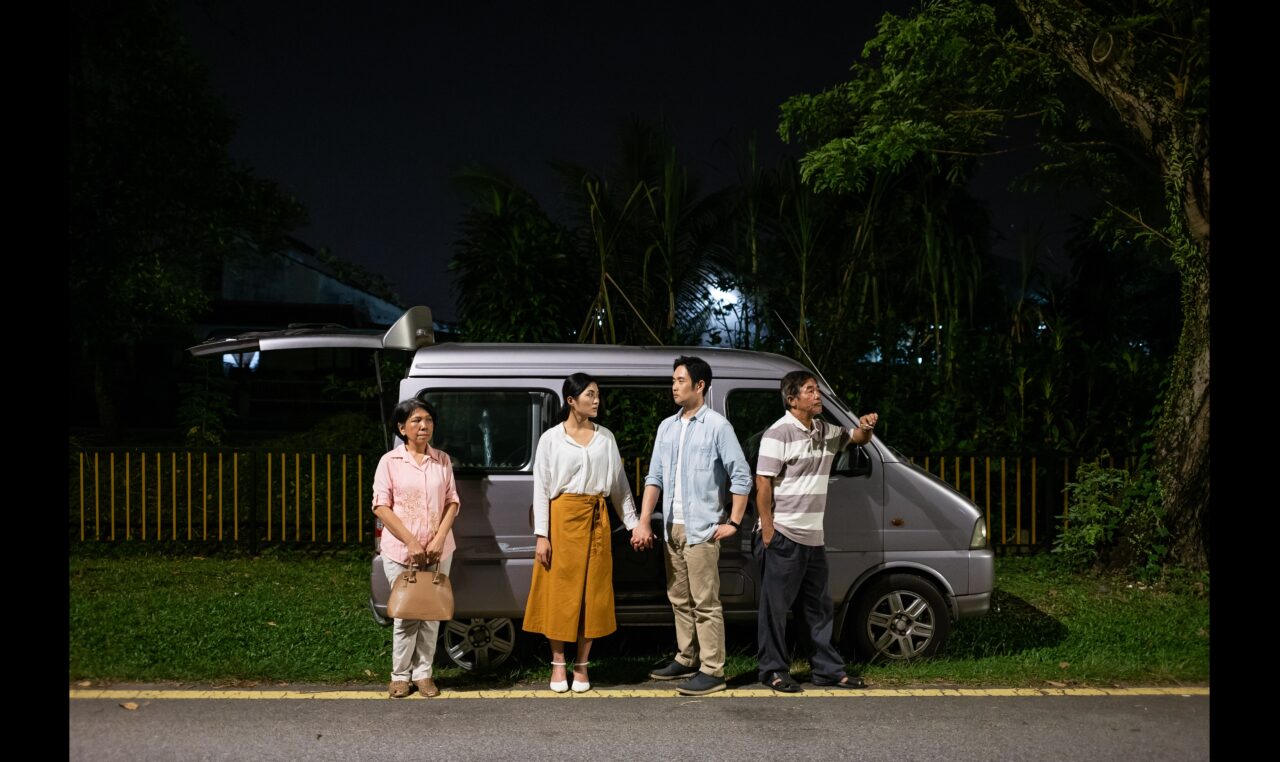 ‘We were at a wedding’: On Kin Wai Yam’s Pulang

Pulang operates in subtleties. Directed by Kin Wai Yam, the film centers on Yao-Wei (Lawrence Wong), a Malaysian, bringing his Taiwanese girlfriend, Yu Ying (Chia Jen Hsu), home to meet his parents, Tian Cai and Yu Yen (Low Teng Hoat and Siow Foong). There are no explosive confrontations or arguments, nor does Yu Ying make any catastrophic faux pas as a foreigner. Rather, tensions are left to play out in silences and conversational gaps. As Wei’s parents drive to the train station, they bicker in Hakka over radio announcements of monsoon season arriving in East Johor and West Sarawak. On linking up with Wei and Yu Ying, they exchange introductions before loading up and driving off together, setting in motion the film’s events: driving down the highway, picking up a SIM card for Yu Ying, attending a wedding, and experiencing a flat tire. It is not an uncommon setup for a story, rife with expectations about how parents treat their children’s partners or how behavioural discrepancies emerge when one is at home. Pulang, or 季後風 [Ji Hou Feng, meaning After the Monsoon], was Yam’s graduation film, crafted under the auspices of the National Taiwan University of the Arts. Yam himself falls under a broader history of Malaysians being educated in Taiwanese universities, with the first crop arriving in the 1960s.

Historically, many Malaysian Chinese have regarded an education in Taiwan as a process of ‘cultural return’ to an ethnic homeland, a consequence of internalising being overseas Chinese or ‘Orang Cina’ in Malaysia. Subsequent returns to Malaysia thus usually intensify a sense of identities shifting between being part of the ‘Chinese diaspora’ in Malaysia and the ‘Nanyang diaspora’ in Taiwan (Nanyang being a designation for Southeast Asia relative to China). In setting up a contrast between a Malaysian Chinese family and a Taiwanese girlfriend, Yam’s autobiographical imprint on the film is immediately recognisable. He captures a myriad of differences between the young and old couple: Wei and Yu Ying are dressed in muted colours and trendy outfits while his parents look comparatively plain; Wei and Yu Ying converse in Taiwanese-accented Mandarin while his parents bicker in a creolised mix of Hakka, English, and Mandarin. In spite of their ethnic, somatic, and cultural similarities, Yu Ying’s reactions to Wei’s parents and their friends are invariably ones of quiet surprise – their conversations slip into unintelligibility when in Hakka or Cantonese, she does not understand the meaning of the English word ‘auntie’, and she is bemused by the dragging out of the proclamation ‘yam seng’ during a wedding toast.

However, any fundamental contrasts between being Taiwanese and Malaysian Chinese are less apparent than in films like Lulu Wang’s The Farewell (2019), which dances between Chinese American, Mainland Chinese, and Chinese Japanese attitudes within an extended family, or Eric Khoo’s 12 Storeys (1997), which is rife with tension between a Chinese Singaporean and his Mainland Chinese wife. That more explicit expressions of cultural difference are not drawn out can perhaps be attributed to the flatness of Yu Ying’s characterisation. She is soft-spoken and ready to play the role of the deferential girlfriend. As Wei’s father inserts a CD and music begins to play, she asks if the singer is Anita Mui, to which he replies that it is Priscilla Chan, his wife’s favourite. Yu Ying comments that her mother loved Anita Mui, a surprise to Wei given that Mui was a Cantopop singer. At the wedding, Yu Ying makes polite conversation with Wei’s mother, pouring tea for her and noting that the air-conditioning must be making her cold. Afterwards, when Wei’s mother throws up, having had too much to drink, Yu Ying is dutifully prepared with tissues and warm water. There could have perhaps been greater friction had Yu Ying been played with less docility. Instead, Yu Ying’s milquetoast presence precipitates the sharpening of tensions between Wei and his parents. If there was any sense of a parental disapproval of Yu Ying or of catastrophic cultural difference, they were not explored with any urgency.

The chief point of conflict is not so much cultural as it is circumstantial: Wei reveals to his parents early in the film that he and Yu Ying have made plans to get married, the shock of which causes his father to brake on the highway. What is intriguing about this is the absence of sought permission – their engagement is a decision that has already been made and Wei waited to tell them in person. Yet, this announcement does not result in any substantive narrative crossroads. Yam’s commitment to subtlety sometimes felt overextended, leaving the film flat in terms of its progression. Camera angles shift from back seat to front, the gentleness of Wei and Yu Ying’s conversation jarring against the mutual berating of his parents. That the most proximate domestic space we experience as an audience is the interior of the car provides a backdrop for carefulness, particularly since any sudden outbursts would cause an accident. Such a directorial decision proved more of a constraint than a catalyst for dramatic possibilities.

The simmering frustration of Wei’s parents toward the haste of his decision making also seems to recede as quickly as it erupts. This was particularly acute in moments when long silences led to protracted attempts to read facial expressions. The camera lingers on them: the quiet thoughtfulness on the lined face of Wei’s father, shots of Wei’s mother in the side view mirror where she is captured at her most wistful. While smoking with his father at the wedding, Wei mentions wanting only to return to Malaysia from Taiwan after a few years in his new career. He invites his father to visit him in Taiwan with his mother to see the cherry blossoms, only to receive the stiff reply that ‘Someone has to mind the shop’. Their visages are refracted in the car’s rear window as an Islamic call to prayer echoes in the background, a reminder of their being part of an ethnic minority. In presenting an emotional distance that precedes geographical distance, Yam foregrounds the tensions created through Wei’s autonomy, one implied to disregard the sacrifices of his parents.

Where Yam brings these tensions to a denouement is through a flat tire. Walking to the car after the wedding, Wei offers to drive, noting his father and mother’s inebriation. In his only outburst, Wei’s father shouts at him, refuting the accusation that he is drunk, before turning to his wife to say, ‘Look at the son you raised’. Wei’s infantilisation, implied previously by his father loading his luggage and driving, is foregrounded in their ride home. The silence in the car provides telling subtext: his parents are irritated at Wei’s perceived ingratitude. The scene is set up for a drunk driving accident as the car’s rear experiences a bump, only for the jolt to be revealed to be the result of a tire’s puncture. Wei obstinately tries to fix it himself. Unscrewing the nuts of the tire with a spanner, his father comes by his side, assuming a gentler, more pedagogical tone. He shows him where to kick to lift the car and where to use the spanner. Their mutual irritation begins to ebb, symbolised by a shot through the rear window of son asking father for a cigarette in Hakka.

This implicit reversal, from Wei deciding to get married without consulting his parents, to his father offering advice as Wei changes the flat tire, sets up the film’s emotional resolution as represented by a changing of places in the car. Wei assumes the driver’s seat with Yu Ying beside him, while his parents nestle into the back, bickering about his mother’s drunkenness and father’s grumbling. As they drive off, one is left to ponder whether Wei and Yu Ying’s tenderness will eventually evolve into a familiar rhythm of nagging and bickering, or if entirely separate tensions surrounding the trajectory of their marriage will emerge in Taiwan. Priscilla Chan’s ‘千千阙歌 (Qian Qian Que Ge)’, or ‘Thousands of Songs’, plays over the credits, a musical coda for the love Wei’s father holds toward his mother. Somehow, the film’s conclusion was underwhelming, a return to a kind of internecine peace without a rising tension to precipitate it.

At the film’s ending,  I was left to ponder the significance of its two titles. Pulang means ‘return’ in Malay, which is intuitive given Wei’s return to Malaysia, but is also curious given that none of the film’s dialogue was in Malay. 季後風 (Ji Hou Feng) means ‘After the Monsoon’. This sets the atmosphere of much of the film – grey skies and humid, balmy air – but says less about the precise dynamics at play within Wei’s family. Perhaps there is something to be said about the peace that follows torrents of arguing, but equally, beyond an initial radio announcement, the narrative possibilities promised by the aftermath of the monsoon season seemed to be left by the wayside.

Nevertheless, the film is at its strongest during moments of tenderness: between father and son, mother and future daughter-in-law, Wei and Yu Ying.  The prevailing notion of marriage, the celebration of it, the acceptance of it, thus finds itself as the logic around which the film is organised: the promise and consistency of past and future family, for worse, and hopefully, for better.