Without a body, what’s there to love? 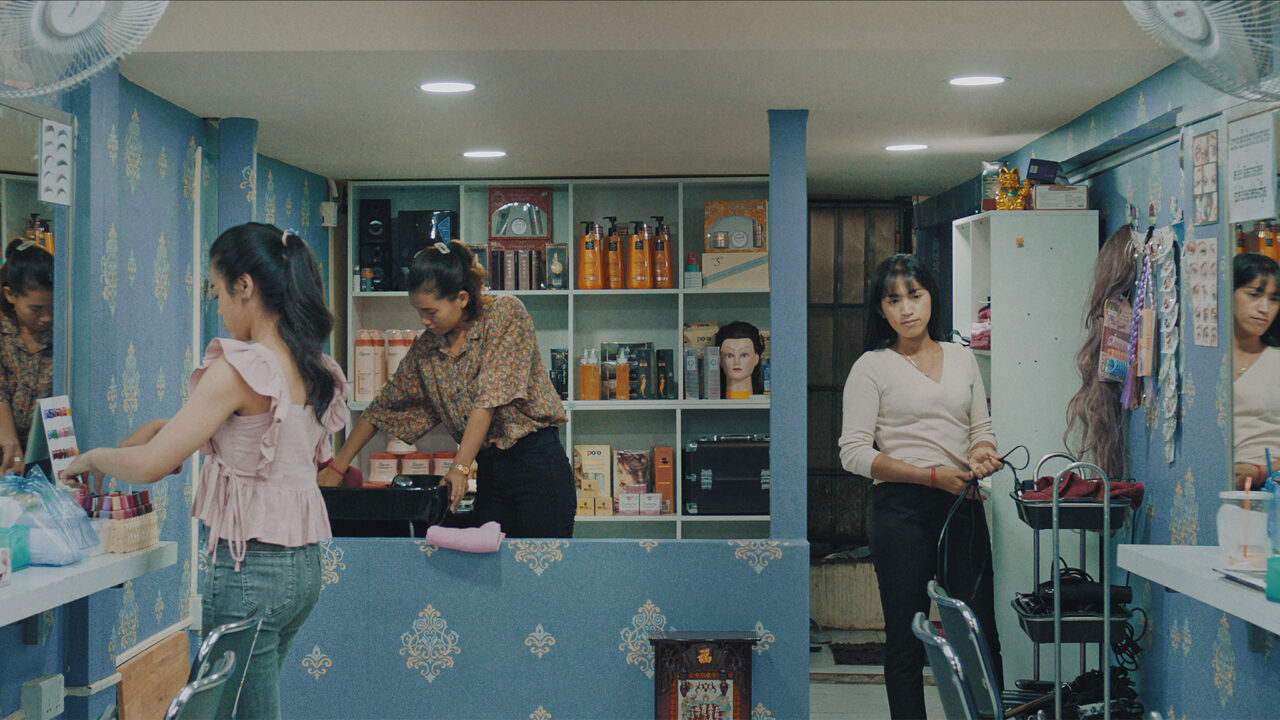 Without a body, what’s there to love?

Sunrise In My Mind

What are sex and love but stories, to someone who has experienced neither? What little I know is cobbled together from film, music and day-to-day conversation. But that seems to apply to everyone these days. Experienced or not, we are all caught in the relentless gravitational pull of sexual intimacy in pop culture. We are transfixed by the dual ubiquity and mystery of sex and love — that they are intimately private and publicly shared at the same time, and that together they are transformative in some way, that after such experiences people somehow emerge reborn. ”You seem different since your wedding night,” one woman tells another. “Everyone says the first night is amazing.”

Danech San’s Sunrise in my Mind is pervaded by references to sex and love, mirroring real life in the way we can’t go a minute without hearing a love song, a conversation about romance, or the latest sex scandal. It’s in the media the film includes: the crooning song in the background and the show a beautician watches on break, where a female character makes it explicit: “If we don’t use our bodies, how can we show our love?” It’s also in the conversations the characters have, in the aforementioned topic of wedding nights, and in the locker-room-talk of young men on break — “Imagine if you have to deliver to a girl. What do you guys do?”. There is an open wondering, in these conversations within the private circles of each gender, that points to a shared fascination with sexual desire and romance, in a social context where the topics of love and sex are ubiquitous in media.

In the midst of this our main character, Pich, is inexperienced, almost-innocent. In the salon she works at, she is surrounded by baby blue and pastel pink, soft colours made softer by low contrast and lifted shadows. She shies away from conversations about romance, lightly deflecting her colleagues’ teasing about the young man that comes to see her every night. When he does arrive, with an excuse that he wanted to get his hair washed, the two of them are painfully young and awkward together. He has no preferences on what shampoo she should use, or whether he’d like to sit or lie down when she washes his hair; he only wants to ask her if she’s had dinner, whether she’d like to have dinner. Pich, meanwhile, borders on standoffish, telling him not to be too familiar, deflecting his questions. But all that shrinks in significance once we segue from their dialogue into a transfixing sequence of close-ups. This is an elastic, exquisite minute of Pich’s hands in the young man’s hair, kneading his scalp with steady pressure; followed by an extreme close-up of soap suds, her fingers still pushing through his hair, over and over. Time slows, our field of vision narrows, until we are sliding into a smaller, square aspect ratio, with shots with the barest of movement: the man’s bare chest, their still faces, their hands intertwined. The dark blue tint, the soft caresses of light and the steady sound of water dripping evoke an insulated world, underwater and womb-like.

Sunrise in my Mind therefore offers up a departure from the “high-class love” described in that beautician’s TV show, a love that involved “no touching, just expressing feelings”. Here, no feelings are expressed, and we are instead hypnotised by a steady, physical intimacy. This is nothing if not sex: her hands in his hair, bodies moving in concert, a repetitive push and pull. And in parallel, the blue-tinted underwater close-ups invoke something sacred, sated and post-coital, the tighter frame limiting the world to the simple fact of human bodies. In sum, this sequence lays bare the physicality of sexual intimacy in direct contrast to the explicit references to it that permeates its social setting.

Yet the film’s ending complicates this slightly. From the post-coital still shots we cut to a fish tank, with the light filtering through the water seemingly giving the previous sequence their bluish tint. Two fish circle each other in the tank, before we cut to a wide shot of the young lovers having dinner, where the brightly lit area of the salon corresponds to the square aspect ratio from before. It seems strange, at first, to compare the couple to fish in a fish tank. Is this to say that we are but animals with base instincts? One could consider, perhaps, that this film merely told one story of many in the world, like a pair of fish isolated from the rest of the sea. There was nothing very extraordinary about this story — they simply have dinner together after, with little acknowledgement of how transformative the popular imagination expects sexual intimacy to be. It is simply a fleeting story of sex and love, precious for the way it enshrines physicality as connection and as intimacy. Indeed, to quote that beautician’s show once more: “Without a body, what’s there to love?”