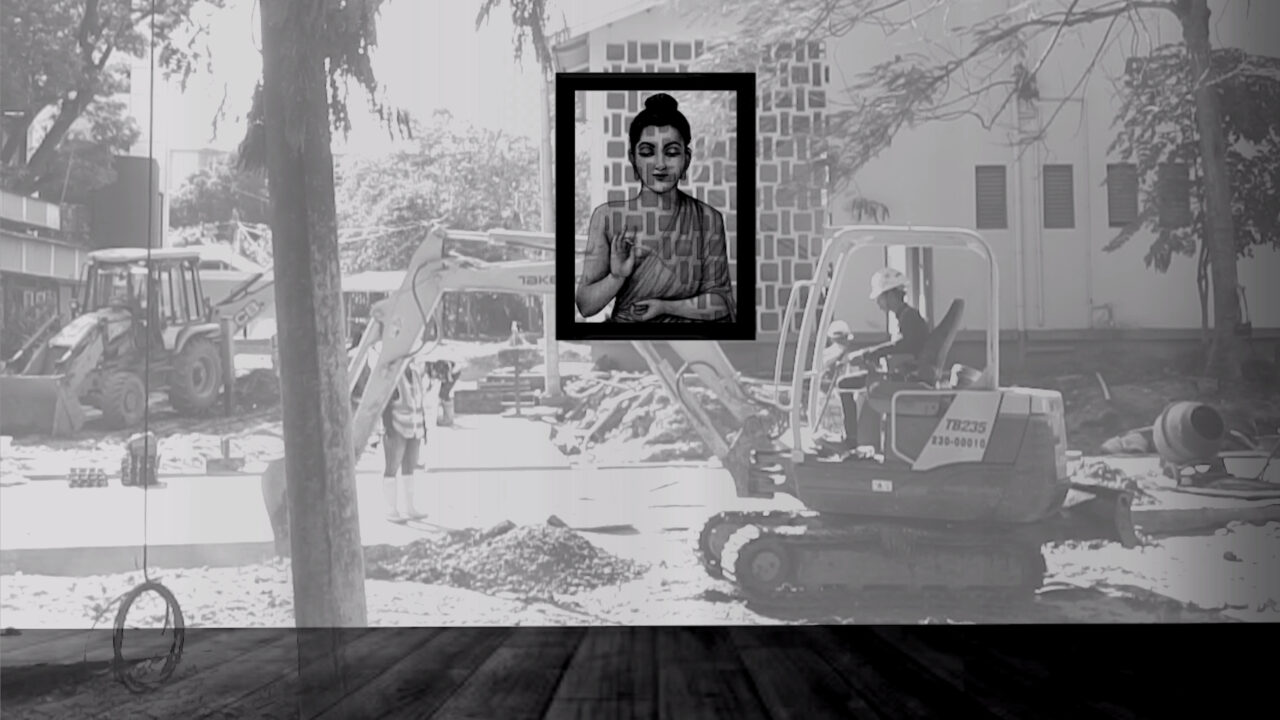 Estate is unconventional in its visual expression, for most of the scenes in the film are obscured with a filter that makes the images on screen indecipherable, appearing as black and white vertical lines. Although we can recognize the movement of human figures across the screen, the turning on and off of lights in the room, and camera panning, most of the visual information is unavailable to the audience. Because of this, the viewer is made to rely on sonic information instead.

Estate is a Burmese short film by Lin Htet Aung, an avant-garde poet and young filmmaker who began making short films in 2017. He described it as “an experimental short film about a son who takes care of his father with a terminal illness at a place which only has time.” The film is narrated by his friend and fellow poet, Htet Oo Maung, whose poem Boat Contests inspired the film.

We follow the narrator through the Estate, as he walks on the creaky floorboards, turns on the lights and goes for a smoke. At this point, the peaceful quiet is interrupted by a ghostly animation of a window that opens to the view of a dog walking haphazardly in the waves. The narrator’s voice is frustrated, as he tells the viewers about his stubborn and ill father. The subsequent narration takes place over the head of a decapitated dog, laying on the wooden floor, as we are told of the narrator’s father who lost both arms and legs. He shouts into nothingness, “I have arms and legs, Dad. But my legs keep coming back to you”, “my hands are for pushing your trolley bed”. These sections allow us to detect the frustration of the narrator and his longing to separate from his father, though still painfully bound as though his limbs exist for the purpose of replacement. Parental frustrations are the most difficult, because we are inextricably bound to the ones who give us pain.

In one of the film’s final narrations, the narrator speaks of his father, “when I was little, I used to go to his plays. Watching him dance from behind the curtains. I didn’t had a clue, but I exactly knew where he was on the stage.” This memory seems to directly mirror the scenes on screen, camera footage being obscured like a black and white curtain, so we only see the dance of lights and shadows.

The film ends on a white screen, as a child is interviewed about a dog torture and eating incident instigated by the narrator’s father. At the shout of the interviewer’s cut, the rolling credits appear. This is the first time the narration is not led by the narrator; it feels like an afterword, or behind the scenes footage of contextual research.

In its 16 minutes, this short film was empty, quiet, and gave viewers the time to breathe, relying less on visuals to tell a story. It stands out in the program as it appears to have a completely different understanding of what visual storytelling in a short film could be, shifting importance away from what we see, but more of what we hear.