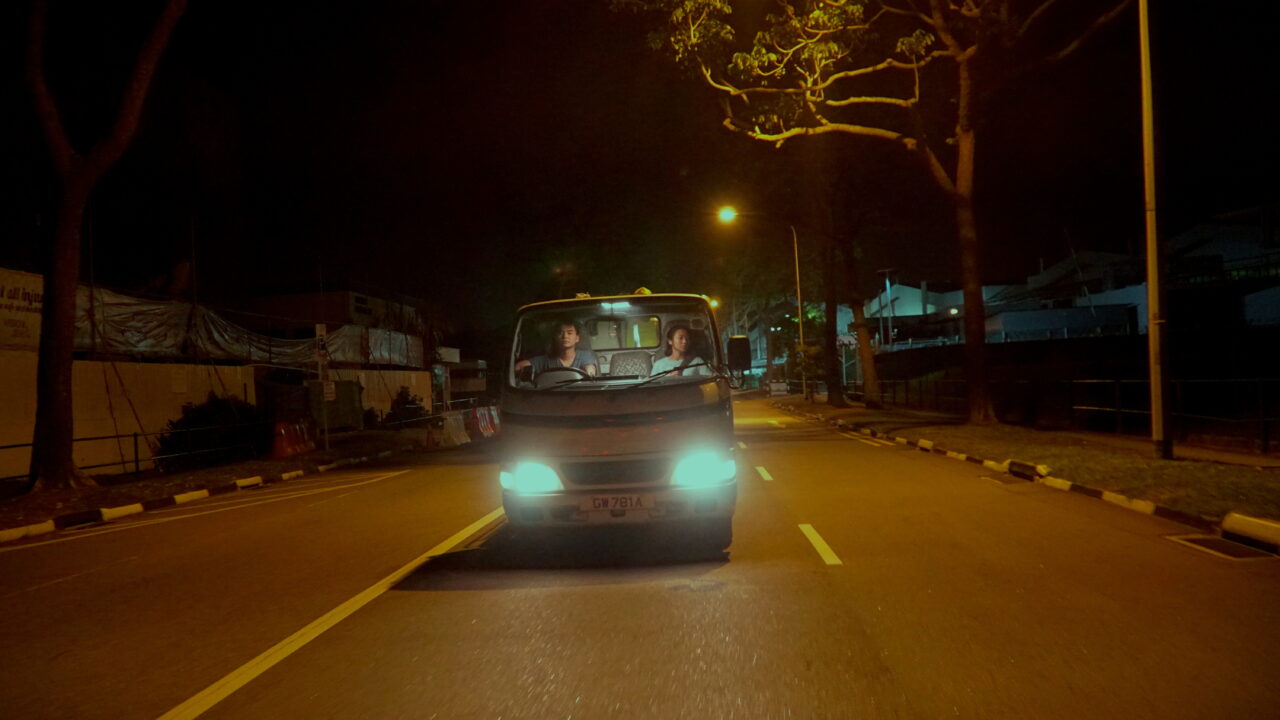 Here Is Not There

Here is Not There is a meditative portrait of invisible people, whose work of building or keeping the city running often goes unseen. Directed by Nelson Yeo, the story centres around two nameless lovers, a male Malaysian worker (Hong Yu Yang) and his colleague from China (Bobbi Chen). They roam the empty streets in a truck, transporting items around the city for the Hungry Ghost Festival.

They have come to Singapore in search of a better life, taking odd jobs like packing and moving offerings for the festival. The man is a pragmatist, seeing his work as an opportunity to capitalise on taking on jobs the locals don’t want. For the man, this involves taking the graveyard shift and working while the majority of the population is asleep. As such, they inhabit a strange world, which Yeo evokes by situating the characters in familiar spaces. There is an uncanny feeling of seeing these places devoid of people.

The first half of the film takes place in an empty mall. At night, after completing a delivery, the couple retire to the rooftop. As low-wage workers, they talk about coming to Singapore in search of a better life. The man explains that it at least pays triple to what he could get back home. But it is an unenviable job — the work is menial and lonely. Yeo effectively evokes this mood by intercutting the story with other inhabitants of the graveyard shift, mall security guards, toilet attendants. Yeo keeps the camera fixed on a tripod, and the stillness of the frame and subject imbued these glimpses with an enigmatic melancholy amplified by the emptiness surrounding them.

However, even among low-wage workers, there is a hierarchy. The man takes consolation in being one rung above another group. By way of gesturing to a couple of racially-inappropriate, life-sized effigies they carry around, he refers to construction workers and foreign domestic helpers. Modern slaves, he calls them. This reference to migrant workers feels especially poignant in today’s context. The spread of COVID-19 infections in the dormitories, where hundreds of thousands migrant workers live, revealed an inconvenient truth. It exposed the plight of a group of people largely hidden from public view, crammed into tiny living quarters in remote areas of the country.

The man asserts that unlike them, low-wage workers have free will: “We have a choice, they don’t,” he says. There is a visual irony in his words, based on the way Yeo opts to cover the scene. It is an intimate conversation on the rooftop, he opts for a wide shot instead of a typical closeup. The frame calls attention to the half-constructed building in the distance. The couple barely occupies the bottom of the frame; as they speak the tower looms large. Even this tender moment is interrupted by a constant reminder that their right to live in the city is tied to their ability to work.

Despite the man’s assertion of his free will, the couple spends most of the time wandering around aimlessly, transporting the effigies around Singapore. Their movement is akin to the jellyfish, a recurring motif in the film. It’s a wonderful image — that of an ancient species older than the dinosaurs –  that evokes the other-worldly atmosphere of the graveyard shift. Its shape and movement, formless and directionless, also serves as another visual contradiction to the man’s claims of free will. The couple are like a pair of jellyfish, whose lives are dictated by the currents of commerce. Where the money is, they go. And when they no longer serve their use, they are discarded. Their lives have the illusion of free will, where they can decide whether they want to work. But in reality, it’s a Hobson’s choice, which grants them the freedom to make a decision in which only one thing is offered. To accept life as a transient and ultimately disposable commodity, or to return to the place they sought to escape. Which is to say, there really is no choice at all.