Who is that animated doodle figure I see? 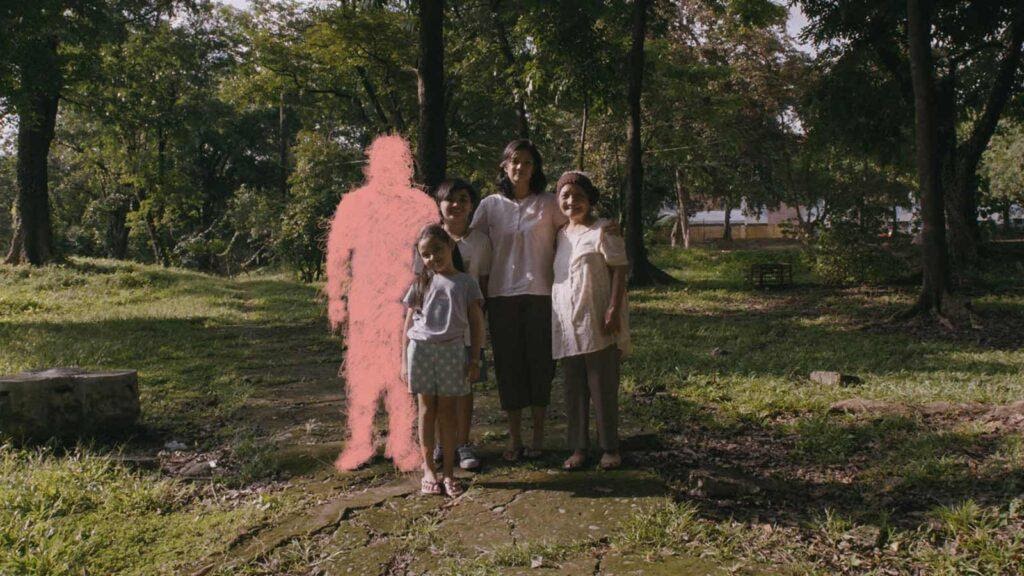 Who is that animated doodle figure I see?

Children express their feelings in various forms, and drawing is one of them. I notice that children sometimes put distinct characteristic details on their drawings of their closed ones. They draw moles, glasses or give them certain hairstyles. It might not be perfect. It might be a doodle or stick figure, but you can tell the difference between the characters. However, what if someone is portrayed as a monochrome plain figure with no details?

Judy Free opens with Judy looking at airplanes in the sky. After working abroad for several years, Judy’s father comes home to the Philippines. Judy does not look as excited as her mother and grandmother, walking slowly to meet her father. She also looks a bit confused because her father is an animated doodle figure which resembles a child’s drawing. The father even asks if she is Judy. The feeling seems to be mutual.

The director, Che Tagyamon, introduces us to Judy’s world, a world where she is surrounded by only her family members. It is clear who the odd one out in the family is. The visual shows how Judy has no impression of her father after being separated for years. The plain doodle figure feels too obvious: just make it plain. Furthermore, it has no referent in the film, and the choice of color, shape and figure seems to be rather arbitrary.

However, being closer in terms of distance does not necessarily help Judy to connect with her father. Judy sits near him for lunch, but he totally ignores her. When they do have a small chat, Judy ends up being distracted by an airplane. Judy looks at it because her mother always tells her that her father is in the airplane, which is ironic, for her father is sitting next to her. She looks at wherever she believes her father is in.

Tagyamon also likes to play with our expectations. When her father tells her that they both have prominent ears, Judy innocently says that she cannot see them and neither can we. When her father is giving her a piggyback ride and she looks excited, but it still does not reveal anything about him.

The process of revealing the figure is unpredictable. Judy touches her father’s left hand when she takes remote TV. Once she touches it, her father’s left hand is revealed. However, it returns to being an animated doodle figure in the following scene. When we think a physical touch is the key, the piggyback ride earlier does not reveal the hands she holds. The figure might be a metaphor of Judy doing scribbles on their family photo to cover her father’s figure. Later on, it is proven wrong by the reveal of his right hand in a family photo session. It could be a metaphor for Judy’s unstable state of mind, but the direction feels random and inconsistent. It seems Tagyamon uses it for her convenience. The formula could be something small that people do not notice at first, but when they think about it again or they discuss with friends, they will get it.

Her father is back to being a doodle, and it is time for her father to go back. Their time together is still not enough for her to get to know him. The film is an allegory of the need for greater connection between a migrant worker and their families. It shows the irony of the father working overseas to provide for the family, but he has no connection with the family because he must be away for a long period. The family relationship is a transactional one. Going back seems like a chore, and so does serving him when he is back. The film components like the visual and the amazing performance from Miel Espinoza as Judy are effective to tell the story.

The ending confirms her father’s position in an interesting way. Judy finds herself in the public place of an airport, seeing for the first time people outside of her family. There, people slowly turn into animated doodle figures, just like her father. These animated doodle forms show how Judy sees strangers. They are all in various colors: different, but not memorable enough. Unfortunately, her father comes as a stranger and leaves as a stranger.