‘Like surrendering to a current’: On Pham Ngoc Lân’s The Unseen River 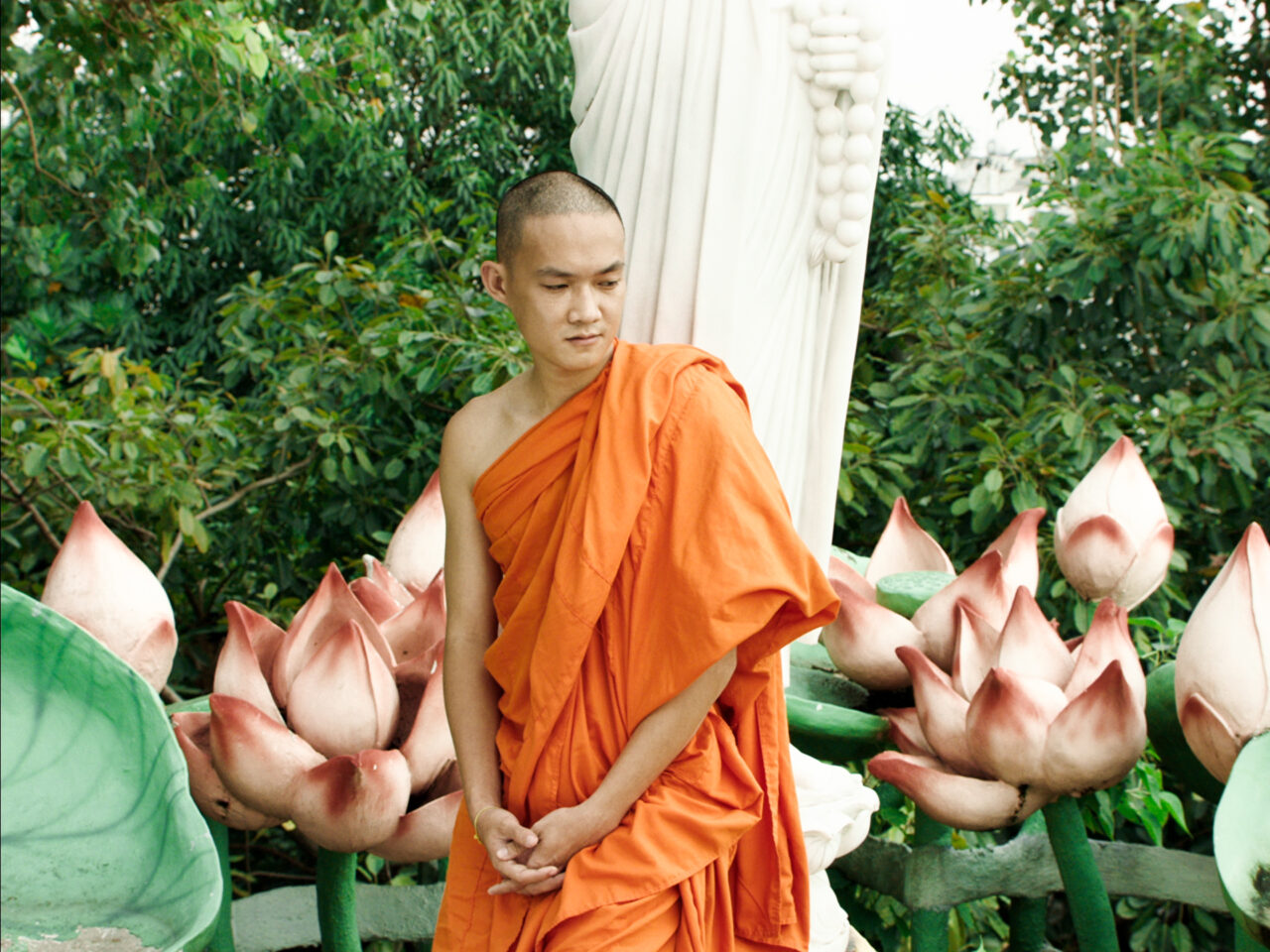 ‘Like surrendering to a current’: On Pham Ngoc Lân’s The Unseen River

The Mekong River is long. It begins at the Tibetan Plateau and flows through China, Myanmar, Laos, Thailand, and Cambodia, before emptying out into the Mekong Delta in Vietnam. The river is rich in aquatic biodiversity, and it provides fecund support for fisheries and agriculture across mainland Southeast Asia. Damming upstream has hindered the flow of the river, but it continues to sustain communities along the peninsula. This agglomeration of meanings, it would seem, allows us to understand the river based on what can be seen.

In his short film The Unseen River (2020), edited from the film anthology Mekong 2030 (2020), what Vietnamese director Pham Ngoc Lân instead presents is a portrait of what is unseen by and about the Mekong. Pham introduces two sets of characters that anchor the film’s interweaving storylines. The first, a young couple (rapper Wean and singer Naomi) who have arrived at a monastery by the river to seek a cure for the man’s insomnia. The second, two older former lovers (a stoic Nguyên Hà Phong and reflective Minh Châu) who fortuitously reunite at a dam. These relationships provide the substance of the river’s metaphorical power, a sensitivity to the flow of time and energy that bears the unmistakable imprint of Buddhism.

Upon arriving at the monastery, the young couple – with tattoos, earrings, and spiky or dyed hair – are presented in contrast to the shaven, robe-wearing monks. This sets up an intuitive, bald-faced clash of modernity and conservatism. However, Pham sidesteps this neatly in presenting the young man’s pressing need for better sleep: instead of friction between worldviews, a dependency is established between the couple and the monks as they seek a solution to the young man’s insomnia. Amidst the sound of percussive rhythms, the chanting of sutras, and golden bodhisattva statues adorned with LED lights, the monastery’s abbot (Mạc Can) remarks that ‘sinking into a deep sleep is like surrendering to a current’. He further states that ‘The river is kind and forgiving to you and other sinners, just like sleep is merciful to its masters’. The poeticism of the abbot’s language presents the first glimpse of the unseen river, that which lulls the body to a place of physical and spiritual rest.

The film then cuts to its other storyline, set up by long shots of a piebald dog scampering across lush vegetation, climbing up coastal rocks, and swimming in the river. The dog attracts the attention of a woman standing atop a dam, water flowing sparingly through its crevices. A man emerges from the water, and it is revealed that they were former lovers, his leaving coinciding with the inauguration of the dam. The man remarks that his body, bearing cuts and lesions, has been scarred by the river, marks ‘inked into my flesh just as they are into my heart’. The woman remarks that there are things only time can mend even as she dreamed of the man while married to another. In panning shots, the former lovers stand at a distance on different ships. Here Pham presents the second dimension of the unseen river, suggesting that the flow of time is able to wash away the detritus of hurt and pain.

This movement between the two couples draws the unseen river out as a natural order, an overarching cosmic force to which one yields to receive forgiveness and rest. The film suggests this most prominently through a young monk (Hoàng Hà). While fishing, he indicates that it is done without bait or barbs, but with a light at its end. The fishing is for peace of mind, he explains. It is revealed that the monk’s wife and child went missing in a flood, and that they appear in his dreams, sitting and staring at one another. Observing the young man’s insomnia, he states that ‘the worst thing about sleeplessness is dreamlessness’, for ‘dreams allow us to see into the past or imagine a future’: poor sleep seems to prevent the young man from envisioning marriage. Looking to a statue of Buddha set against the mountainside, the monk states that ‘Sitting beneath Buddha’s shadow, I have nowhere to go’. Through the monk, Pham presents a collision of literal and metaphorical rivers: where the coercive force of a flood takes life, acknowledging the flow of a cosmic order brings peace.

Left to ruminate on this, the film’s final sequence presents the young man’s attempts to find peace. Unable to sleep, in the swimming dark of night, he brings the fishing rod with its glowing lure to the river. As the young man sits, the camera pans away, treating us to still shots of light breaking onto the Mekong in ripples of watercolour as a lute is plucked rhythmically in the background. The darkness of night yields a grainy quality to the shots, but this fades from attention as the sight and sound of the river blend into an immersive serenity. The film’s final frame, tears falling across the young man’s face, does not quite resolve the ambiguity belying his continued insomnia: is he experiencing a spiritual hindrance? Is this a moment of release or frustration? Does the young man enter the ‘unseen river’ that is spoken of? These elements are left to play out as the film fades to black, overlaid with a song by Naomi and Wean themselves.

The strength of Pham’s film lies in his deft handling of its philosophical substance. In the absence of a metaphoric ballast, such attention to the Mekong may have come across as self-indulgent or deprived of greater significance. Instead, buttressed by depictions of discomfort and hurt, the capacity of the river to soothe is heightened. The peace promised by an unseen river, the passage of time, the inexorable flow of a cosmic order, is juxtaposed against the immediate peace brought by the quiet, meditative quality of flowing water. Pham’s firm grasp of colour grants the film a deep visual serenity.

Given that the film is supported by the Mekong River Commission, one might have imagined an urge to pursue a documentarian’s impulse and capture the variety of disruptive damming practices or forms of injustice occurring upstream and down. Instead, Pham directs attention to the gentle procession of all things as they will. This is not to suggest a passivity in the film’s characters, or stubborn attempts to resist an invisible force. Rather, the ability to be drawn to this current demands discipline. That the young couple hesitates to get married, for an inability to envision a shared life, pushes against this intentional yielding. Perhaps more could have been done with the older couple, but a sense of irresolution may have been deliberate. The relinquishing of a reluctance to yield to this cosmic flow grants a contentment that allows one to enter the unseen river. As with the young monk, being in the river grants an ability to see the past clearly, and to enter into a calm future.

By allowing the river to provide much of its narrative anchorage, Pham’s film reminded me of Kim Ki-duk’s Spring, Summer, Fall, Winter… and Spring (2003). Kim’s film too is patterned by a natural procession, with each season set against a stage of a Buddhist monk’s life, and is also attuned to the fierce attention demanded by natural imagery. Pham has crafted a beautiful, lyrical film that left my theatre awash in a kind of mesmeric, meditative silence. As the film came to a close, I was reminded of the lines of the African American poet Langston Hughes: