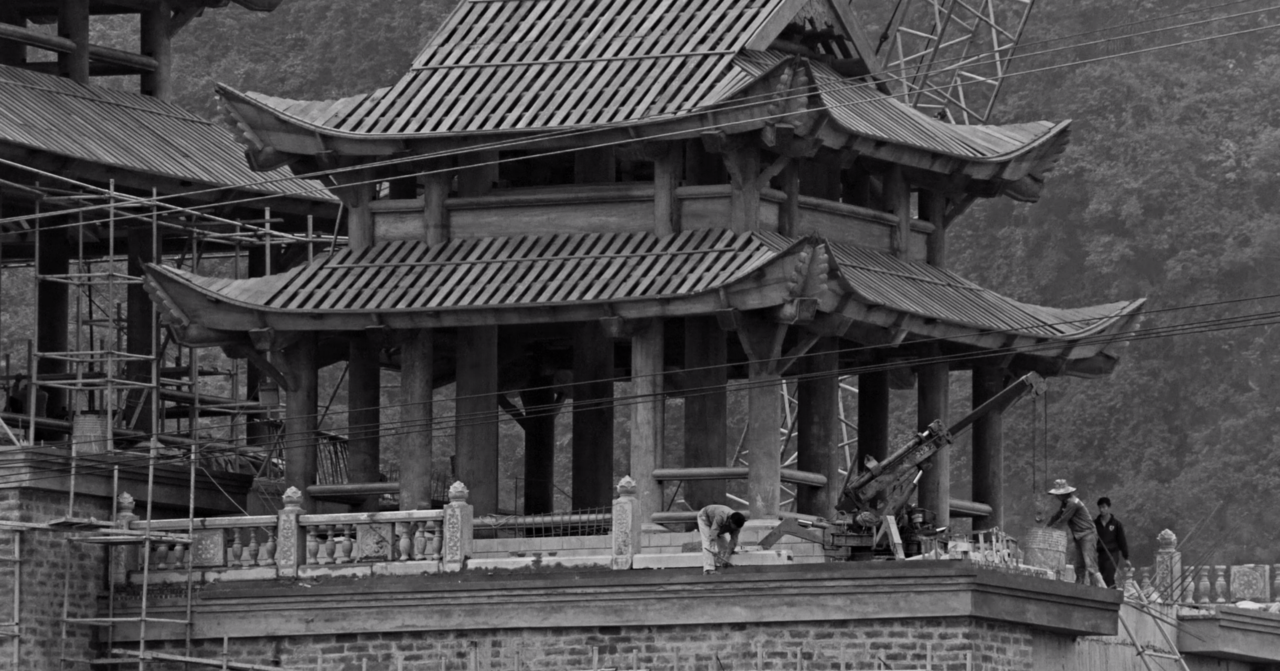 “After almost 6 years in the States, I came home to layers of dust in the air. Vietnam is a big construction. My mom and brother had moved into an old apartment, 38 meters up from the ground. She got him a new name, Bình, as her fortuneteller suggested it would protect him unhurt.” — Ostin Fam

Ostin Fam’s Binh opens with a dialogue between The Boy, and his Spaceship. They have landed on a planet like theirs, but not quite theirs. “Have we returned home after all?” “Not really.” Wandering through the landscape, The Boy gets on a truck with an old man, stirring up thick dust as it drives towards the construction site of a gigantic temple. Construction noises echo through rocky mountain valleys.

Set in Vietnam where Fam is from, Binh (2020) tells the story of characters looking for home. The Boy follows a Lonely Man, who tries to communicate to his wife through a Medium, the only way the Lonely Man knows how to get in touch with the person he built a home with. “Please let me know when I can take you home”, he pleads, holding his “wife” in his arms. On the way to the temple, he smokes from a thuốc lào, a bamboo bong, saying “love hides in a pipe”. Getting high from the tobacco is probably his only escape into a world where his beloved still resides. There is a strong sense of loss with this man, and I have to sympathise with his loneliness of having been left behind in this world feeling half like a home. The Boy, in choosing to follow the man’s journey, likely realizes the similarity between their innate senses of loss.

Following the two’s journey, we meet The Medium, a fascinating character. She is dressed fashionably, her nails are excessively embellished with plastic gemstones, and big hoop earrings hang from her ears. She has access to the spiritual realm, but is very much grounded to the world, adorning herself with its accessories, scamming the vulnerable because she’s scared of nothing “except starving”. Her concerns are pragmatic, while her spiritual abilities are used not for spiritual comfort or direction, they are used for a more worldly reason of staying alive. I believe in some sense she represents Vietnam, which builds massive places of worship like the gigantic temple seen, to expand its religious tourism industry. Like the surreal image of the hot air balloon pasted with an image of Buddha, like some sort of advertisement, Fam may be using the character of the Medium to show how Vietnam is now treating its own religion. Not as true spirituality, but a material representation of it.

Scenes of reality are interspersed with scenes from a dreamworld. In one of these pink-tinted shots, The Boy sees a chicken roosting in the crevice of the base of a tank used in the construction site. When he looks inside, the chicken is nowhere to be found, but its egg is laying in the dried mud. I felt this chicken represented all of the characters in the film, who do not have a proper home, and instead have to live out of random places, unable to find solace in any physical space or within themselves. In Vietnamese, bìnhcan be interpreted as either balance (平), or vase, vessel. But the title may also refer to the relationship between Fam and his home country Vietnam, like the new name given to his brother – something Fam has to get used to and accept.

The Boy mentions a woman he sees in his dreams (the Medium), whom he hopes will communicate with him and help him rebuild his home. What has happened to his home? Has it been destroyed? Fam does not provide any answers to these questions but instead suggests “maybe we had been away for too long”. Coming home to a place that has been changed so much by development likely makes anyone feel like an alien landing on a different planet. I think the use of black and white film also aids in creating a sense of distance and separation that disconnects viewers from the present, giving the film a look of unreality and reality simultaneously, and feeling untouched by time.

In the concluding images of the film, the scene leaves the timelessness of black and white and takes on full colour. Perhaps The Boy has accepted his circumstances: that he has been abandoned by his spaceship, that he is stranded in a world not quite his own. His realization mirrors his decision not to look away or leave, but to stay and make a life in this new space. He chooses not to distance himself with this black and white view of the world, but to take the familiar yet foreign world around him as his current reality. We see him follow the truck into the distance, not looking back.