A Ghost Story, Together (and in Parts) 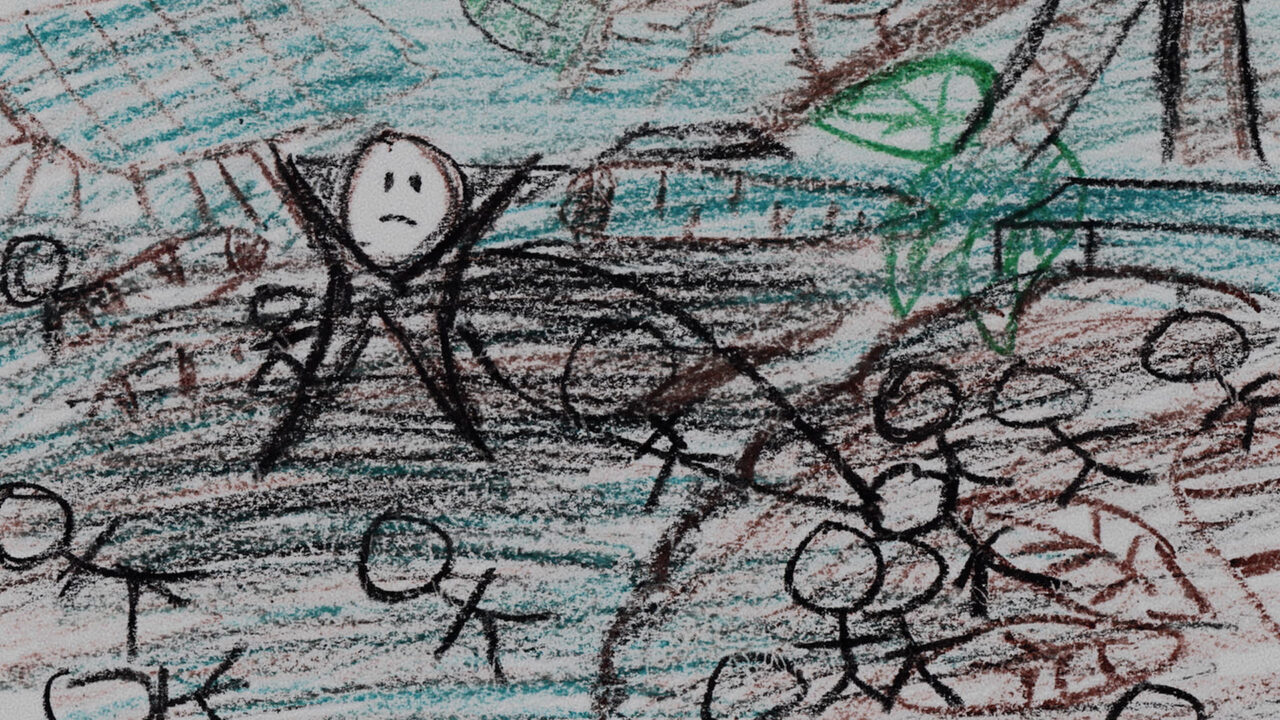 A Ghost Story, Together (and in Parts)

To Calm The Pig Inside

To Calm the Pig Inside by Joanna Vasquez Arong is a film defined by a visceral fragmentation of memory and trauma. To document the destruction left on Tacloban City by Typhoon Yolanda in 2013, still images from photojournalists Veejay Villafranca and Piyavit Thongsa-ard are interspersed with video footage by storm chaser James Reynolds. Presented entirely in black-and-white, the result is a stark tapestry of distress: a child’s shoes in the rubble, the relentless battering of wind, the crashing torrent of water. Far from being easier to bear, this approach makes each shard of trauma singularly important as it mimics the caverns of the mind, where every image, sound, or memory can hold boundless depths of devastation.

Arong’s attention to fragments stems perhaps from a distrust of the capacities of conventional documentation. Despite the ample news footage available on Typhoon Yolanda, the worst storm to ever hit the Philippines, this footage is used only to demonstrate the rampant corruption and ineptitude of the Filipino government. Arong is intensely aware that what is captured and conveyed by news outlets, is often shaped by the intentions of politicians and limited by the practices of journalism. Instead of the neat narratives and statistics found in headlines and reports, Arong turns to the drawings of children as a source of evidence. While rudimentary with its stick figures and crude depictions of ravished homes, these drawings still function as a more accurate rendering of the jarring, roughened edges of the gashing pain left by the typhoon.

In her narration, Arong tells us that residents had failed to understand the language used by news outlets to warn them of Typhoon Yolanda, specifically the term “storm surge”. We are shown the ruins of Tacloban City as we hear this. Evidently, no words could have adequately articulated the realities of communities destroyed and the staggering nature of its accompanying agony. Arong attempts to render the indescribable comprehensible with a skillful combination of fact and the folkloric, challenging the notion of a secular linearity of disaster bound by tangible starts and ends. Within the frames of the film, the trauma and memory of Typhoon Yolanda live beyond 2013, haunting the coastal plains of Tacloban City.  In recounting anecdotes shared with her by survivors, Arong turns To Calm the Pig Inside into its own kind of ghost story. One anecdote tells of a jeepney driver driving through the aftermath, only to pick up otherworldly passengers, soaked and dripping with a storm that had already passed. Blurry images of the jeepneys fill the screen. If you squint, you can almost see spirits lingering in the haze.

Ghost stories often serve as partial resurrections of the dead. Be the ghosts real or not, the recognition offered by these stories can serve to keep spirits and their narratives alive. In Arong’s hands, personal history, with its individual ghosts and traumas, is a kind of folklore to be passed on to generations to come, and a tribute paid to those lost. Arong tells us that she has grown up with stories of ghosts. Indeed, a deep spirituality arises in the film when she speaks of her grandmother as though summoning her presence through sheer force of memory.  As Arong speaks of the government’s neglect of Tacloban City, she slowly pans across the wreckage. We see houses hollowed out, trees flattened, communities razed to the ground. As then-president Benigno Aquino argues that there are “only” 2,000 dead and not 10,000 as had been reported (which has also since proved to be a lie), the film lingers on mass graves and cemeteries. To Calm the Pig Inside demands that death and destruction be reckoned with, and that these stories of ghosts continue to be told. While the state may have turned away, we must not.

The singular moment of joy in the film is in its opening scene, a buoyant instance as children play on the water-slicked ground. As the camera zooms out, it reveals the ruins that the children play in, fracturing the initial gentleness of the scene and thrusting the viewer firmly into the reality of Typhoon Yolanda. It is devastating, but it also functions as a reminder of the solace that can be found in community. Even though Arong is not native to the coastal areas most affected by Typhoon Yolanda, in her role as director and narrator, she weaves herself and us into the lineage of loss borne from the typhoon. She may not have been directly affected but she stands witness, forcing us as an audience to do the same.  In doing so, Arong harkens back to the urban legend of Buwa, the pig that lies in the centre of the earth, and the villagers who would call out its name together, to calm the pig when its anger caused the earth to shake.  There was no stopping the force of nature that was Typhoon Yolanda, but this film creates witnesses of us all, spurring a powerful rallying cry that screams out in hopes of quieting its aftershocks and calming the rage within.