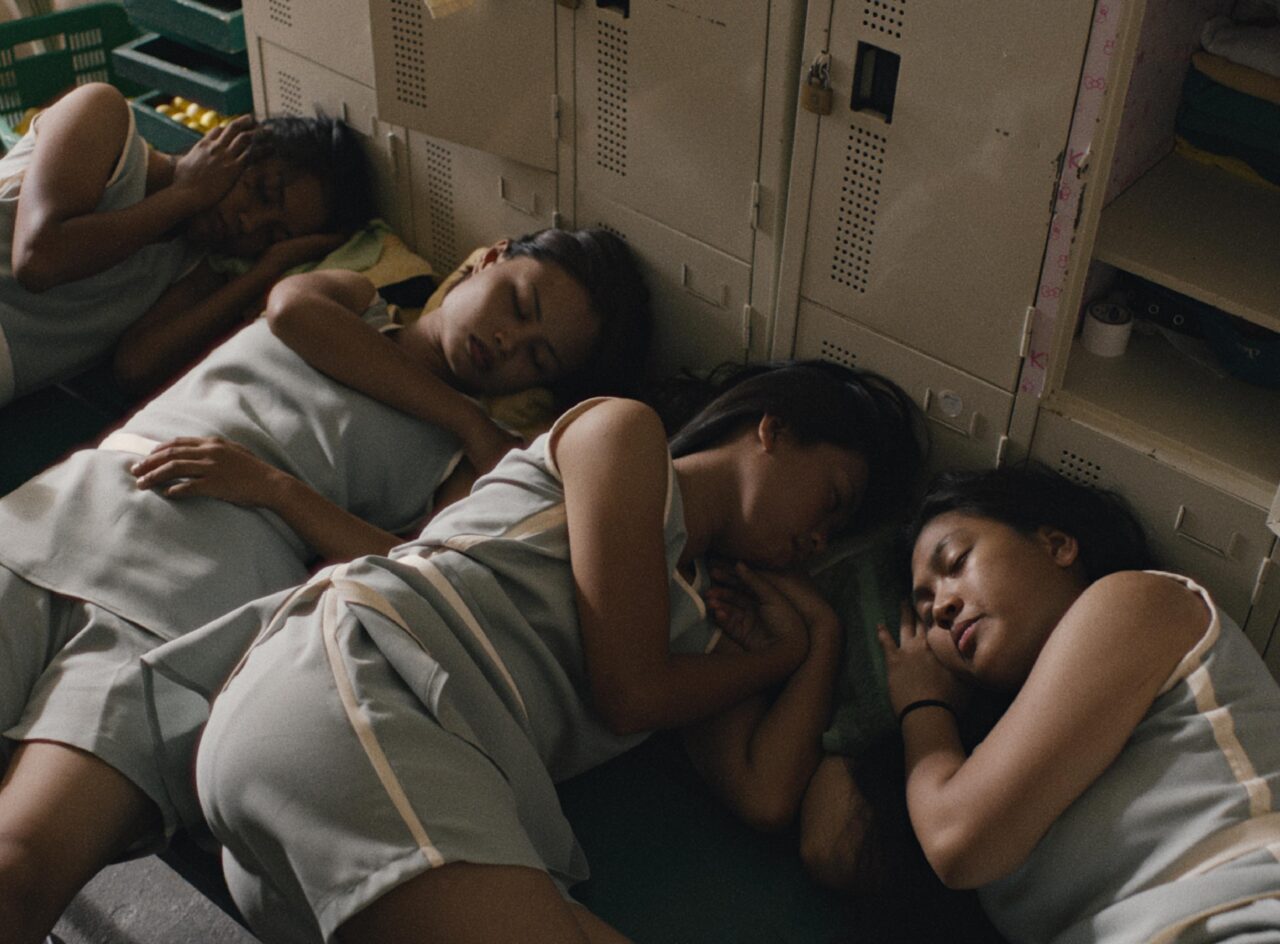 Written and directed by Rafael Manuel, Filipiñana follows the curiousity of newly hired “tee girl” Isabel in a sprawling, manicured golf course. We encounter snippets of her work life ranging from a plump, overbearing manager, oblivious golfers and their carefree wives and children, bored and bitter colleagues- everyone contained in their own microcosm of status.

Uniformity is painstakingly choreographed in the film, from the timed, blunt swings of the golfers to the instant replacing of golf ball after golf ball from the tee girls. Filmed with the golfers’ back to the viewer, the tee girl stoops low at the base of the golf club, dangerously close to each swing. Isabel is one of many who are numbed by the weather and used to being ignored. She goes through her job with routine exasperation and politeness, answering questions tacitly, never batting an eye as each swerve lands with a resounding thwack, like meat being butchered. Nobody gives away a hint of expression, but it is evident that each group of people on the course keep their respective social cogs and gears running.

Exploring the golf course as a unit of hierarchy, order and secrets, we trail Isabel’s piqued rebellion against the monotony of her duties. She busks in sand pits, seizes languid smoke breaks and sneakily samples cake intended for the golfers. In these moments, the vigour of her youth fights to break out from the cocoon she is forced into; the golf course transforms into a place of surprises for split instances, a vast territory for exploration. Isabel’s various escapades however, are a painful revelation of one’s place in the world, and through stranger eyes.

Accompanying her is a covert tune she croons, Si Pilemon, a Cebuano folk song about a fisherman. In a scene, her fellow colleague Charlie overhears her song while asking Isabel if she can borrow a lighter. The two women smoke together as Isabel reminisces about her hometown of Ilocos, lamenting the cheapness of tobacco and paralleling its beauty to the golf course. The temporary freedom in sharing a cigarette break extinguishes when Charlie is requested by a golfer to return, and Isabel is left alone watching other women fish stray golf balls from a pond.

Charlie’s brief interaction with Isabel is significant. She is some years older and seems to have been promoted from tee girl to caddie. In fact, the caddies appear to be the ones instrumenting the game of golf for the men. When the film begins, we see a male golfer floundering in his shot. He knowingly hands the club to a female caddie, who effortlessly hits the ball for him. The caddies need to know the game better than the golfers, reticent in their assistance. Charlie holds her golfer’s club as she smokes with Isabel, aware of the ability she wields in the game, hapless that it is under the command of someone else. In spite of their wan indifference, Charlie leaves when she is called, just as Isabel obeys when she has been reprimanded for her actions.

Desserts in the golf course are a treat reserved for those who command. When Isabel is reprimanded by her manager, a melting sundae glazed with flies stands uneaten on the counter of her superior’s sheltered office, and Isabel glances at it with envy. Later on, Isabel chances on another dessert counter, laden with cake and ice-cream, guarded by a sleeping staff. Pretending to be a passing cat, Isabel lifts a cake cover to try a smear of frosting. The staff rouses awake and informs Isabel that “people have been fired for much less”. The desserts remain untouched, and Isabel and the guarding staff are sequestered  from the privilege they represent.

The choice of literal uniforms for the characters reinforce their social standing. The toothpaste white, dry-fit polos and tapered brown trousers for the golfers, topped off with matching visors and sport sunglasses. The powder blue power suit adorned by the golf course’s sole manager is a statement piece for women who are bystanders to power dynamics, enabling the see-sawing politics and imbalance. Isabel’s uniform is a sleeveless grey top and culottes, with translucent knee high socks and schoolgirl shoes. It is an uncomfortable testament to her age, her enforced appeal in her innocence and submission to be taught, to learn from the others, to be seen and not heard. The female caddies wear a bright pink shirt and pants get-up, perhaps to be distinctly seen on the fields of green and men in white as reliable markers of service.

Their attires govern the way they behave. A young son of a golfer wears the same attire as his father, foretelling his inevitable future as another player on the green. The wives of the golfers also wear visors and sunglasses to shield their eyes and faces from the sun. When the tee girls are arranging the golf balls in their trays, they play with tongue-twisters as they work. “Dogs discuss a dog’s disgusting dog-meat, seventy seven shipped sheep”. They joke , but they also stretch the limits of what they can and cannot say. There is humour too in interrupting the structured wordplay, in distorting the mundane rhetoric of the day and the clothes they can wear,

The weight of a day’s work is heavy when scarcity is real and lingering. But the pitfall of scarcity is also that of digging a deeper hole than the one you are already in. When one is used to having very little, temporary relief has to be carved out of your own accord. You spend what you have on instant gratification. By attempting to make life more manageable for herself, Isabel also sees very little way out of her current rut. At the end of the film, Isabel and the other tee girls change out of their uniforms and enjoy the afterhours of their shift. They sing karaoke, smoking and drinking cheerfully. Isabel is asked to sing Si Pilemon aloud: it is the first time we hear the song’s self-deprecating lyrics. A lonely fisherman catching a mudskipper, selling his spoils in a market, biding his free time with sugarcane rum. Isabel’s eyes stare into the distance, passing the evening away with her friends, the comfort of cigarettes and drink placating the next day’s repeated cycles. It is here that the concept of class is enforced – it is hard to stay on, and even harder to break free.