What happens when it all falls apart? Clement Yue covers the films in the third programme of the Southeast Asian Short Film Competition. 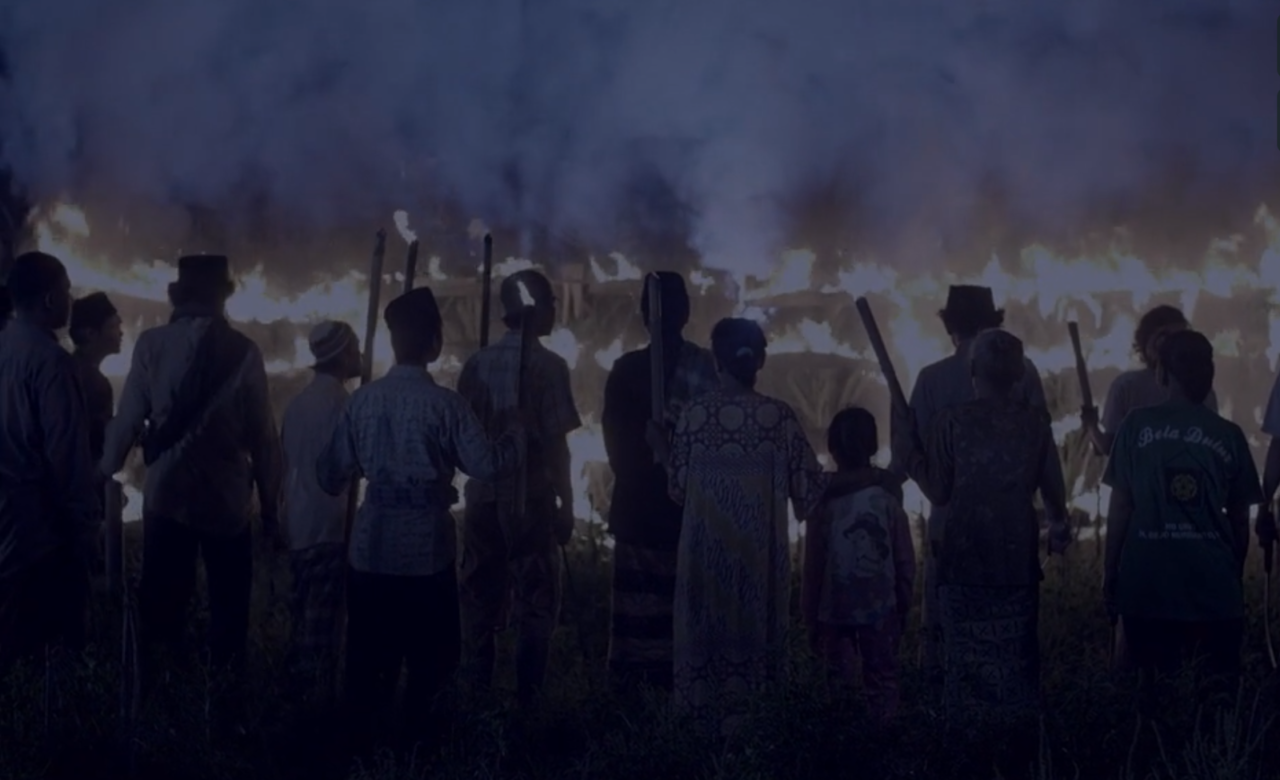 A girl gives birth to a snail, a series of ninja attacks are plaguing Indonesia, and we finally know what Wong Kar-wai looks like without his trademark sunglasses. The films in Programme 3 of the Southeast Asian Short Film Competition force us to think about how we all strive for a better future, what we give up in pursuit of it, and what happens when it all falls apart.

Set in the backdrop of the 1998 East Java ninja scare, Bura is a film by Indonesian director Eden Junjung that focuses on mass hysteria and its aftermath. In the ninja scare, organised assassins, dressed in black, attacked local religious leaders dubbed “ninjas” by the villagers. They were hunted down in Salem Witch Trial fashion. The total number of casualties was reported to be 248, but is believed to be higher.

Bura follows a young guard who leaves his post to be with his lover and gets caught up in a mob hunting “ninjas”. Shot mostly in low light, the film represents a feeling of helplessness. As the men stand around watching their property burn, the chase ends and they stare into the flames – their efforts futile. The young guard turns back to the camera in anguish; leaving his post could have possibly ruined the livelihoods of his friends and family. Instead of searching for a better future, the film shows its loss; purplish smoke rises in the night air as the shoulders of villagers grow limp in despair.

Dossier of the Dossier

Turning the emotional dial a full 180, we have the humourous Dossier of the Dossier by Thai filmmaker Sorayos Prapapan. A director and a producer, down on their luck, fail to get funding for their film. The two men contemplate the arduous journey a film has to make from storyboard to silver screen. Shot in black and white, the film suggests a back to basics approach: the breaking down of a film to its elements by tracing its origins. The men reexamine their motivations, dissecting them to find out if the flame for film still burns. At first, the eponymous dossier gets blamed for their shortcomings, but they realise that instead of playing that game, they should just get on with things and make the film anyway. The dossier, which gets rained on and disintegrates in the final shot, is a manifestation of their efforts to rely on external help for their film. They learn to trust themselves as filmmakers. The film itself is, impressively, made from crowdfunding efforts. You gotta practice what you preach.

Just how far would you go to help a sick friend? SICK by Zaw Bo Bo Hein follows the sick Aung Naing and his friend Maung Bhone’s whose efforts to raise money to send him to a better hospital are Herculean. Maung Bhone goes all over town, calling in all his favours, but raises just a fraction of the amount required. Bedridden, Aung Naing is in a pitiful state – his friend has been gone for days and the hospital is bare-boned. He tries repeatedly to leave and once attempts suicide by removing his I.V. drip to bleed out. When Maung Bhone returns, Aung Naing begs him to take him away. Aung Naing is then piggybacked into the warm rays of the morning sun. It is oddly comforting to know that even if he ends up worse off, he is loved. It is together that they walk into the unknown.

Birth of Golden Snail is a film by Thai director Chulayarnnon Siriphol. It is rife with controversy, having been banned from the Thailand Biennale Krabi 2018. Like Dossier of the Dossier, this film, an homage to the silent films of the early 20th century, was shot almost entirely in black and white. Also, the dialogue of the film is communicated through title cards. The film moves rapidly through time periods – cavemen and Japanese soldiers in full military regalia occupy the same film. The soldiers capture a girl spying on them burying gold, who later falls asleep and dreams a sensual dream about snails. She then wakes up and gives birth to an enormous snail. She encases its shell in molten gold, and from that gold emerges a baby boy. There is an undercurrent of subversion; roles are reversed and things aren’t always as they seem. The Japanese soldiers are kind despite representing war, and snails become the father of her child, confronting our expectations about sex and its various objects. In confronting our expectations, the film confronts out identities: who exactly are we? Chulayarnnon’s work stops before the girl reaches her baby. The question then shifts to ‘where do we go from here?’

ADAM, a Singaporean film by Shoki Lin deals with the daily tragedies invisible to most of us. Adam is a boy living a troubled childhood. His father and step-mother are abusive and beat him when he messes up. Returning from having run an errand, Adam is locked out of the house and goes to visit who we assume to be his biological mother. When things come to a head, he seeks her out at her workplace for solace. She brings him for a haircut and leaves right in the middle of it. The film ends with a shaky shot of Adam running after her. She represented his one shot at a better life and at having a family that loves him. The shaky shot that captures him seeking her company is representative of the futility of that chase. It is a coming-of-age story, with Adam learning the toughest lesson of all – the world can be a crappy place and you are the only one that truly has your own back.

Programme 3 will be screened on 29th November 2019, at 9.30pm at the Ngee Ann Kongsi Auditorium at the National Gallery Singapore.