Emma Ting considers the themes of alienation and belonging in her discussion of the films in the fourth programme of the Southeast Asian Short Film Competition. 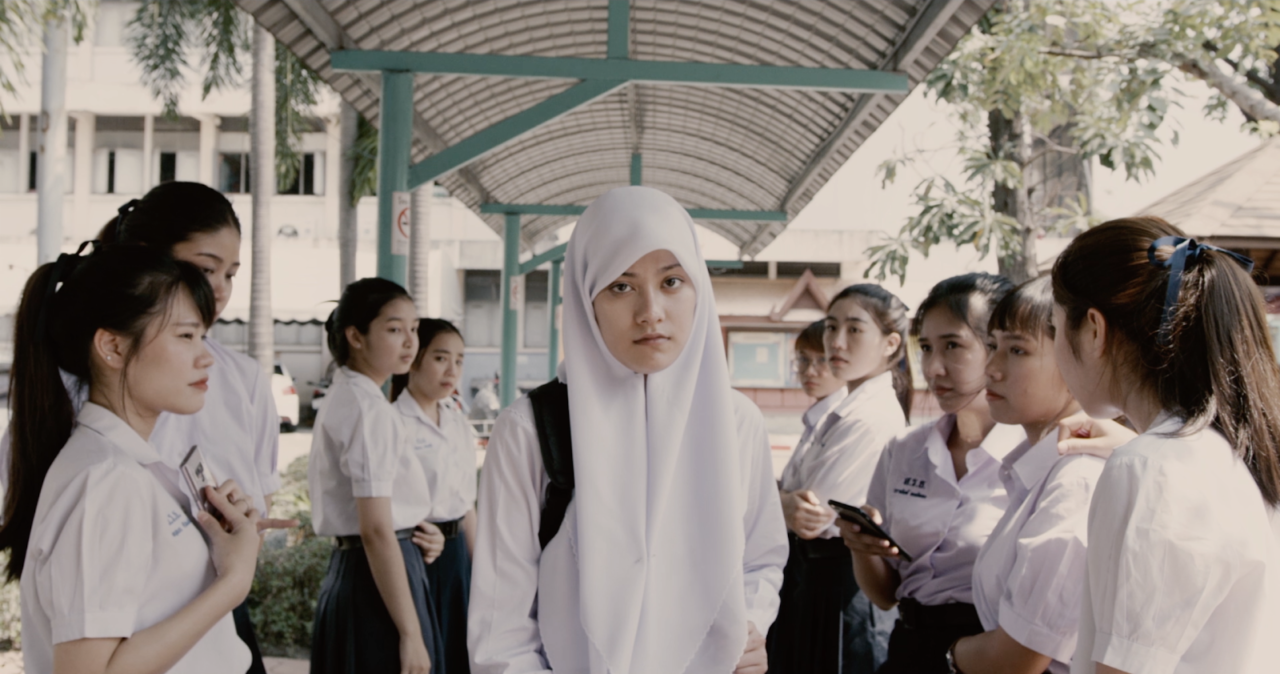 At some point in our lives, we have all felt the need to belong. Each of the films in Programme 4 of the Southeast Asian Short Film Competition explores this theme of isolation. Some respond by expounding on social alienation and marginalisation while others adopt a more personal lens.

I’m Not Your F***ing Stereotype

The former is discussed in Thai coming of age drama I’m Not Your F***ing Stereotype, which peels back the layers on faith and identity. In a post-9/11 world, schoolgirl Maryam Muslimin, from the area near southern border of Thailand, finds herself transplanted in a school where she is the only Muslim. Her identity appears to be constructed from her adherence of Islam. Yet, she struggles to feel that way. Her journey to find her identity is complicated by the misrepresentation of her faith in the media. Her classmates poke fun at her and call her a terrorist. Her struggle to defy the religious stereotype placed on her whilst crafting an identity for herself is hence, the crux of the film.

Interestingly, the director, Hesome Chemamah, and the film’s protagonist, Maryam, share the same hometown, Narathiwat province in Southern Thailand. Narathiwat has a predominantly Muslim populace; one of three provinces in Thailand where Buddhists are not the majority. A sense of isolation is echoed in the film – people do not want to associate with Maryam just because of her background. The film sheds light on the ongoing discrimination of Thai Muslims and acts as a plea to stop misrepresentation and alienation.

Piece of Meat by Jerrold Chong and Huang Junxiang, whilst painting a picture of marginalisation, is relatively ambiguous. The film is a satirical take on poverty in 21st century Singapore. It follows a lamb chop trying to make ends meet for her family. Along the way, class divisions in Singapore are laid bare. Branded watches and champagne bottles represent the wealthy while sundry objects such as a bag of teh and slippers represent those living on far less. The film points out this division in an extreme manner in order to draw attention to the inequality in Singapore.

The choice of subject comes at a particularly relevant time. Since Singapore’s founding, rapid urbanisation and an increase in affluence has propelled the majority of people into the middle class, reducing poverty to something unseen and untalked about. Piece of Meat challenges that view by putting the struggles of the impoverished front and centre, and reminding us that poverty in Singapore exists.

California Dreaming stands out for its subtlety. Isolation in this film is self-directed; director Sreylin Meas chooses to slowly unveil the protagonists’ desire to escape from the past over the course of the film. The oceanfront resort setting becomes not just an escape in the physical sense, but also an escape of an emotional kind. Away from the city – which contains the memories of their past – the protagonists are able to craft separate identities for themselves.

California Dreaming is not so much about the alienation or marginalisation imposed by society. Rather, it is about how personal histories can be alienating and marginalising. The film gives us space to breathe, think, and reflect on our own histories, with the meditations of the protagonists mirroring our own internal dialogue. In the process, it is perhaps that we find ourselves on the path towards reconciliation.

The Graduation of Edison

The final film of this programme, The Graduation of Edison by Pham Hoang Minh Thy, is a coming of age film that features the perspective of an outsider in his community. Minh is ridiculed by his classmates because a tree failed to sprout on his head. He turns to his sister, who has a healthy tree growing on her head, for companionship. However, their relationship is put to the test when she refuses to cut her tree upon coming of age.

While I’m Not Your F***ing Stereotype examines the identity conflict an individual grapples with as a result of social alienation, The Graduation of Edison examines how interpersonal relationships are affected by social alienation. Over the course of the film, Minh and his sister fight several emotional battles to come to terms with their differences from others. In the end, they find out that although their differences distinguish them from others, it does not matter, so long as they stand together.

The films of this programme don’t attempt to give us false solutions to social alienation, marginalisation or navigating differences. What they do instead is lay these issues bare, creating opportunities for dialogue.

The Southeast Asian Short Film Competition Programme 4 will be screening on 30th November, Saturday, at 2:00pm. The screening will be held at National Gallery Singapore.