Saint Sebastian on the Streets 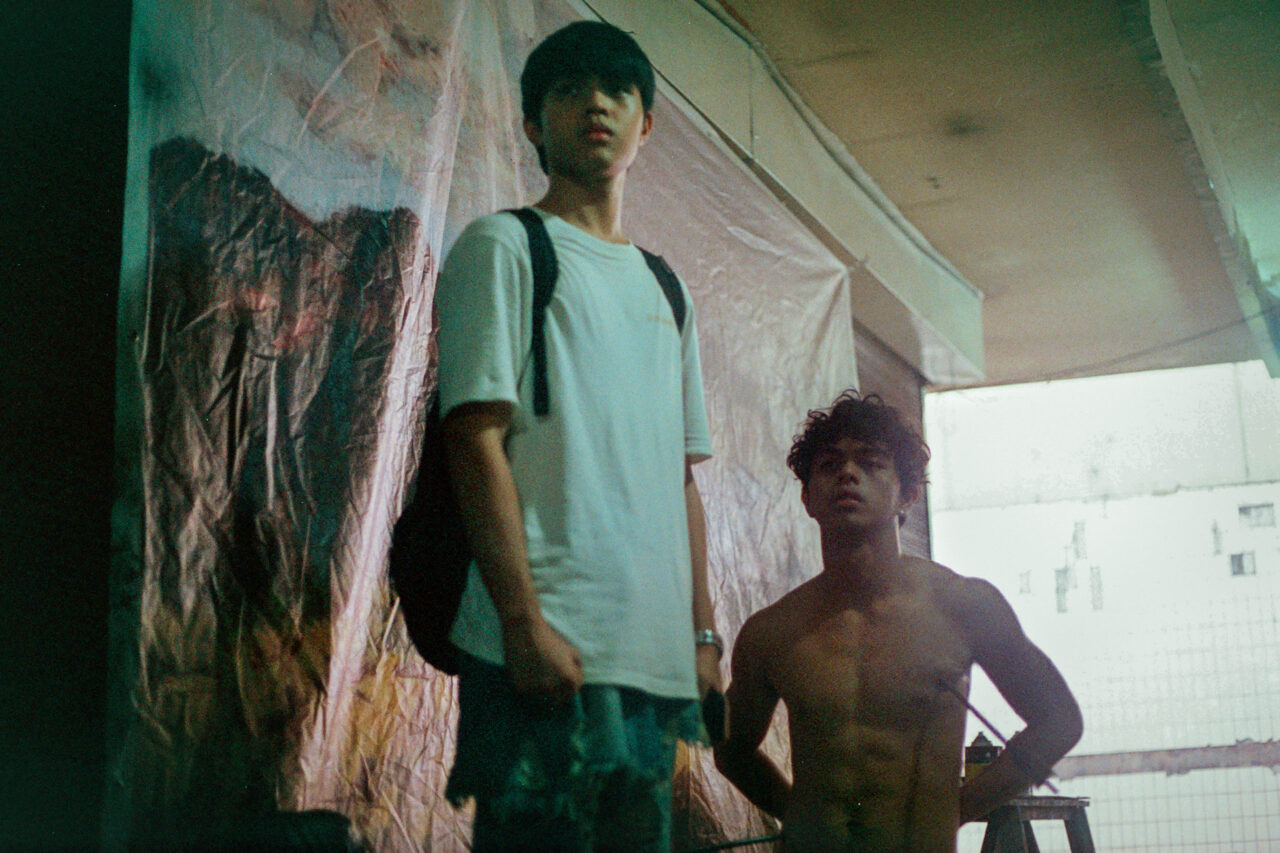 Saint Sebastian on the Streets

How To Die Young In Manila

Streets are not purely transitory, planned spaces of bare concrete. They are deeply political. Who these sites include and exclude, what kind of connections the city facilitates, and whose lives ultimately come to matter within them, are the concerns of director Petersen Vargas. How to Die Young in Manila, through the brief journey of a young boy searching for an anonymous hookup makes for a simple plot, offers entry into a world of desire, doubt, disgust and death.

A lingering scent of isolation and fear pervades the grimy bathrooms, dirty alleyways, and crowded underpasses that the boy passes through. The side of Manila that Vargas lingers on easily turn to cliché under clumsier directing, but here, familiar urban decay, erratic street lighting, and copious amounts of trash artfully contribute to a queer cinematic of the city. Brief moments of heady sexuality and confusion, like a naked man inexplicably reclining in a concrete basin of water by the street. only reinforce this.

“I feel like, in their own beautiful, sometimes messy and chaotic ways, that all queer stories are coming-of-age stories”, Vargas has remarked. How to Die Young tilts towards the mess and chaos. Like the restless, anticipatory trail of the unnamed protagonist, the cinematography shies away from lingering in any one setting. Tight, somewhat static camera angles create a distance between him, giving a sense one is being hunted – even stalked. Threat and satisfaction intermingle. The hustlers populating the streets might loosely share his sexual orientation, but their cliquey behaviour and predatory mannerisms mark them as a threat nonetheless. At these moments, his uncertainty is palpable, but it is precisely this loneliness that makes his decisions to continue within this dangerous underworld equally understandable. Its well-crafted atmosphere speaks where its protagonist elects to remain silent.

The paucity of dialogue sets this short aside from the rest of Vargas’ filmography, lacking the banter of the webseries Hanging Out or the punchy exchanges of 2 COOL 2 BE 4GOTTEN . Its ostensibly realist tone quickly falters with sightings of grotesque, mutilated bodies, and various dramatized deaths In turning away from being the unfiltered experience of a boy’s search for companionship, moments of ambiguity arise. The near-inscrutable expression of the protagonist lends an air of stoicism, rather than desensitization. At times, he merely seems puzzled at graphic, out-of-place incidents. Might the film’s nod towards the symbolic soften, rather than refine,the violence and vulnerability of queer life?

Its most melodramatic, yet baffling moment occurs after an initial misidentification leads the protagonist to unintentionally reject another youth he initially chats with. Cut to the latter’s death in slow motion: now clothed in nothing but white briefs, he writhes in anguish at the various arrows that pierce his body, bathed in a luminous glow. This darkly comic image recalls popular depictions of Saint Sebastian, but toys with its iconographic referents. Who is being martyred, and who is doing the martyring? Here, Vargas elevates the protagonist to the level of the tyrannical Diocletian. If this is a veiled comment on the power dynamics and asymmetries within the queer underground, it is also a visual argument that detracts from the culpability of wider Filipino society in persecuting queer existence. Moments of historical allusion ought to illuminate, not obfuscate.

This is not to say that Vargas is thoroughly unconcerned with wider societal structures. Still, How to Die Young in Manila largely succeeds in being the timely, crucial intervention needed in a tumultuous social and political environment. Even when blurring the line between reality and symbolic, he produces a powerful visual reminder of cruel policies endangering Filipinos of various walks of life. Queer underworlds feature in Filipino film canon, like Lino Brocka’s Manila in the Claws of Light (1975), but Vargas eschews flamboyant stereotypes to comment on everyday, shared environments. Ostensibly symbols of repressed desire and rejection, the bloodied, male corpses recurring in the short also evoke more recent  extrajudicial killings sanctioned by President Rodrigo Duterte that terrorize the city. The victims – alleged drug dealers – constitute another social category coded as ‘undesirable’, who lead precarious existences of their own kind. The short is therefore a grueling reminder of states’ ‘necropolitics’, the power to dictate that some may live, and others are exposed to death and killing. It is telling that the short’s climax is filmed not in an ‘othered’, distinctly hostile space, but a brightly-lit, busy underpass. A young man dies; no one reacts.

Through an eminently relatable short, Vargas offers a creative reimagining of Manila that gives due consideration to the various communities that inhabit it. Even if dramatic, the story it tells is surely not exceptional. Young, queer Filipinos constitute what Achille Mbembe deems the ‘walking dead’, their lives less valuable and easily overlooked. How one comes to die young in Manila, then, is less a matter of taking that first step into nighttime streets, but a decision already made for them by cruel policy and an indifferent society.