On the queer moments that crawl, cross and croon in this year’s Southeast Asian shorts. 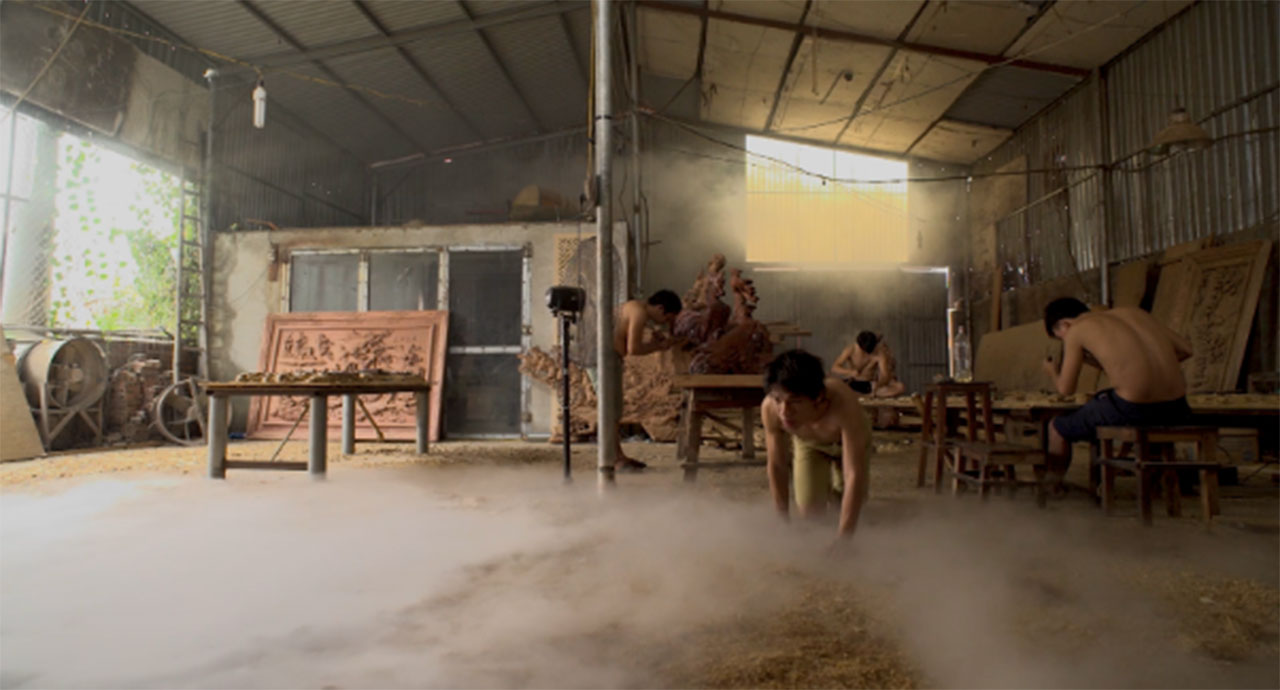 For the festival film goer who wishes to turn the 29th Singapore International Film Festival into their private Queer Film Festival, here’s a suggested itinerary. Begin with The Iron Ladies—the trend-setting Thai classic featuring a volleyball team of gay and transgender players. Next stop—attend a masterclass by Stanley Kwan, the publicly gay Hong Kong film director whose documentary Yang±Yin mined the closet of Chinese cinema for its queer pleasures. Subsequently, the Media Development Authority does some of the navigation work for us by rating

Memories of My Body (which follows the sexual journey of an Indonesian Lengger dancer) ‘M18: Some Homosexual Content’, and Swimming on the Highway (featuring a Taiwanese filmmaker’s friendship with a gay man afflicted by AIDS) with ‘R21: Homosexual Themes’. (What the difference is between ‘content’ and ‘themes’, is only made known to the most astute of cinephiles.)
Finally—look where you least expect. The most surprising takes on queer life are nestled away in the rich programming of the Southeast Asian Short Film Competition.

Take One: Crawling (Or, “No One is Convinced by No One.”)
The screen is wine red. Trails of what looks like worms, flies, larvae and tadpoles are swimming and suspended in it. You get the sense that you are watching an infected bloodstream wash in front of you. Phạm Quang Trug (Viet Vu)’s The Ant-Man carries that baffling opening to a more surreal problem: the protagonist is a gay man who has an ant colony living in his body. Close-up: the first ant we see crawls out of a cavity beside his nose; its antennae are scratching around the rim as if unused to being outside. Zoom-out: the ant rests on the man’s cheek, as if the skin were an uninhabited desert the ant rules over. The man’s eyelids open. He is unfazed.

This unnamed man is a low-life. I mean this literally when we see him sleeping underneath his bed and crawling out as if he were role-playing a cockroach.  Later, he literally crawls across the wood workshop, shrouded in mist, as his co-workers carve away. Of course, the crux of his status as a low-life is his homosexuality. It is telling that one of his friends refer to homosexuality as a kind of ‘corruption’.

Homosexuality is viewed by society as shameful, disgusting, and unclean—we get that when we see the man’s bodily condition. In Viet Vu’s rendering, however, homosexuality is also seen as fraudulent and dishonest—a political metaphor. If the ants are crawling all over the man’s body when he is alone in his bedroom or the bathroom; they are nowhere to be seen when he is with his friends or in public. It is a body that does not appear, or appears only as degenerate. Viet Vu’s debut is a miniature slow cinema; indeed, a crawling but sensitive cinematic take on social isolation and its surreal effects on the body.

Take Two: Crossing (Or, “You’re Crazy, He’s Not a Girl!”)
Amidst a world of fist bumps, blowing smoke rings and long pants, Isfi and a bunch of schoolboy friends are planning a birthday gift for Ricky. When someone jokingly suggests a romantic surprise, the protagonist Isfi is genuinely tickled and shouts, “You’re crazy, he’s not a girl!” Later, Isfi’s close friend Nita helps Isfi puts on a hijab in order to bring her friend over without any questioning from her religious Muslim parents.

In Indonesian director Aditya Ahmad’s A Gift (Kado), Isfi crosses between multiple worlds as playfully as a child who discovers that the world is their playground. This hyper-realistic world of play and possibility exists in contrast to the claustrophobic world of The Ant-Man. As comfortable as Isfi is with a sharp crew-cut and planning with the boys to ‘gift’ Ricky his sexual awakening; we also find Isfi in a heart-warming friendship with Nita, gifting Nita a surprise as moving as it is understated. With Isfi, we cross between the world of male homosociality and female friendship, between the secular school ground and the religious, patriarchal household. These crossings are playful as much as they are instructive for the formation of Isfi’s selfhood and gender identity.

Yet there is a grimmer crossroad that the film suspends only until the ending. Without giving away too much, Isfi reaches the epiphany that these crossings at once allow them to enter multiple social worlds and may also eventually bar them from fully being accepted into some. In particular, the world of hyper-masculinity and casual bigotry would pose real problems for Isfi. Without recourse to fixed identities (the word ‘transgender’ is never mentioned, for example) or heavy-handed political messaging, Aditya Ahmad gifts us a queer world of crossings that I find at once full of pleasure and suspense.

Take Three: Crooning (Or, “I’m Sorry for Your Loss … ”)
Manila. The TV announces the details of Michael Jackson’s funeral at the Staples Centre Basketball Arena in Los Angeles. Meanwhile, the Mindanao bombings rock the Philippines and the government’s confidence to negotiate with insurgent and nationalist groups. This sets up the two worlds that Andrew Stephen Lee’s Manila is Full of Men Named Boy navigates. These worlds are however not the playful crossings of Aditya Ahmad’s. They are already separated, estranged and filled with attempts at atonement that never quite arrive. In order to make his father proud, Boy (a resident of Los Angeles who speaks with a recognisable American accent) returns home to Manila with a child he purchases to role-play as his son.

If the premise of the film isn’t already full of tragicomic absurdity, then the Michael Jackson jokes which punctuate the entire film will convince the viewer of the filmmaker’s tragicomic credentials. Everywhere in Manila, where Boy opens his mouth and speaks, he is greeted with unwarranted condolences at the King of Pop’s passing. “I’m sorry for your loss,” is a croon worthy of laughter and tears, as the pop star’s passing is the lens we understand how Boy is always seen as thoroughly Americanised. In that line, we might also mourn for the private kind of losses between Boy and his father, between Boy’s one identity and another. No matter how much Boy parades a successful sound in matching floral shirts, the seam between father and son, and between two cultures always appear frayed.

A casual viewer might wonder—what’s so queer about Manila? Insofar as the film portrays a scene of estranged father-son relationship, and the failure and shame experienced by Boy for being unable to give his father a grandson he seems to so desire—Manila is full of queer feelings of familial disappointment and estrangement. The recognition of his father’s disappointment gnaws at his conscience, and a deep sense of unbelonging to both kin and nation is what Boy’s face is brimming with when he croons at the karaoke machine in a performance full of pathos. Even without declaring itself as a queer film, Manila croons sentimental songs and silences of queer feelings and does so to a devastatingly powerful effect. Queer-oriented viewers will be sure to resonate with the film’s emotional song-scape.

Queer Southeast Asian films—much less short films—hardly get the attention that mainstream, American-European queer feature films get. Bypassing the usual narratives of ‘coming out’, these films find other movements to navigate the sexual landscape of Southeast Asia. Thus, this year, there might be nothing like Call Me By Your Name and Timothée Chalamet’s pretty face to nominate for the Audience Choice Awards, but queer cinema in the region lives on. It lives on in wood workshops, on a taxi ride, in front of karaoke machines, even beachfronts and the environmental wastelands. I’ll keep you hunting for these queer moments in this year’s programme. The itinerary may not appear as clearly on any road map or programme booklet, but since when has queer pleasure ever been that straightforward?