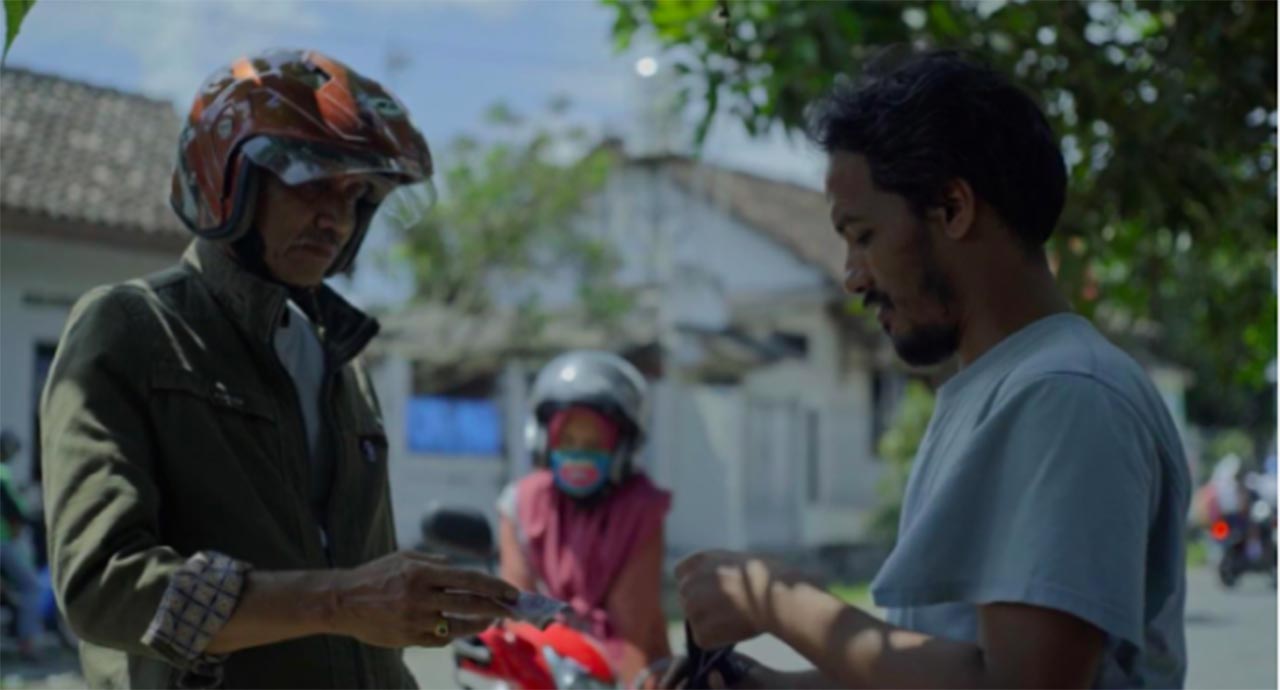 Far from being a quotidian matter, the very act of consuming food often marks our entry into conflicts. Consider that most food production is freighted with unjust practices: there will always be individuals at the receiving end of exploitation, which may masquerade as more localized and invisible forms. A certain tension then develops between satiating one’s immediate needs or wants, and the collective nourishment that is to be gained in more equitable systems of production. In this light, food is not a matter of sustenance, but an important everyday site where different notions of nutrition are contested and where principles are performed.

In Yosep Anggi Noen’s short film Ballad of Blood and Two White Buckets, the crux of the conflict also happens to be an edible one. Protagonists Ning and Mur make a livelihood out of selling saren – tofu-like congealed blood, which is popular in Java and consumed for its fortifying nutritional qualities. With shifting religious beliefs, Ning and Mur find their products being shunned by customers. This is a marginal position from which they can find little recourse. Hanging in the air is an undercurrent of religious extremism, as well as an unidentified, malevolent cough plaguing Ning.

Ballad does not shy away from the fact that religious moderates in Indonesia are under siege from their extremist counterparts. These moderates are perhaps the same people who permit themselves to consume pig’s blood for nutrition and also provide Ning and Mur with their livelihoods. Of course, these radical elements are not absolved of their responsibility, as Ballad dryly lampoons their chants calling for the death of Christian Jakarta governor Ahok (‘killing as a sacred action’).
Yet, it feels incomplete to regard Ballad as a blunt statement against extremism. Ballad may indeed be unflinching in its brief lampoon of extremists, but it is more concerned with conveying the greater, albeit quieter, irony within a society feeding on nutritious products, but at the expense of its gradually sickened foodsellers.
In one scene, a motorcyclist purchases saren to treat his daughter’s low-blood pressure. We then cut to Ning, coughing out blood while cooking the same saren. In the scene after, that leftover saren becomes feed for a farmer’s pigs, who gather voraciously around a bucket. This sequence (the titular ballad perhaps) is essentially a cycle of blood: beginning from an ideal image of nutrition only to bathetically transition into a haram one. Blood in its cooked form is an antidote, yet an unwelcome omen of illness when raw. Sure enough, this resembles the plight of its invisible foodseller – a provider of individual nutrition, yet the scorn of a society increasingly disavowing its own moderate beliefs.

Like the life cycle of blood, Ballad eventually reaches a rolling boil, and Ning’s coughing swells up to a brutal climax. Ning and Mur are literally sickened by these acts of apathy, a solitary response and resistance to society’s collective apathy towards their livelihoods. It is a thoroughly harrowing and discomforting experience to watch this parasitic takeover, but instead of being revolting, it demands from us the empathy that Ning and Mur have been denied.

For Noen, illness manifests in many forms. There is the disease of ideological extremism and there are also the fitful coughs of Ning and Mur at the film’s end, but Noen also makes an additional diagnosis. A society that turns a blind eye to such exploitation when politically (or religiously) convenient is fundamentally a sick society – one coughing and convulsing in hypocrisy.

To this end, how often are we made to bear witness to sickness and its revulsion onscreen? Granted, there is nothing novel to using sickness as an extended metaphor. But, depictions of illness onscreen often rely on a kind of ellipsis, showing the subject in various stages of sickness, but rarely committing its focus to the sick body per se. Even if the sick body is captured, it is unlikely that it will be to a degree as visceral as Ballad’s final minute.

Reviewing that final minute, I found myself entertaining a rather silly thought. Perhaps as an offering of empathy, could we possibly cough alongside (literally) with these ostracized foodsellers? Insofar as coughing is entirely the product of a physiological reflex, we can certainly never situate ourselves amongst the same illnesses and malaises. At the same time, we remind ourselves that resisting hypocrisy demands the exploited to be entitled an exclusive voice. Sometimes, that voice may sound like a cough.