Holding Hands and Laughing Atop Eggshells 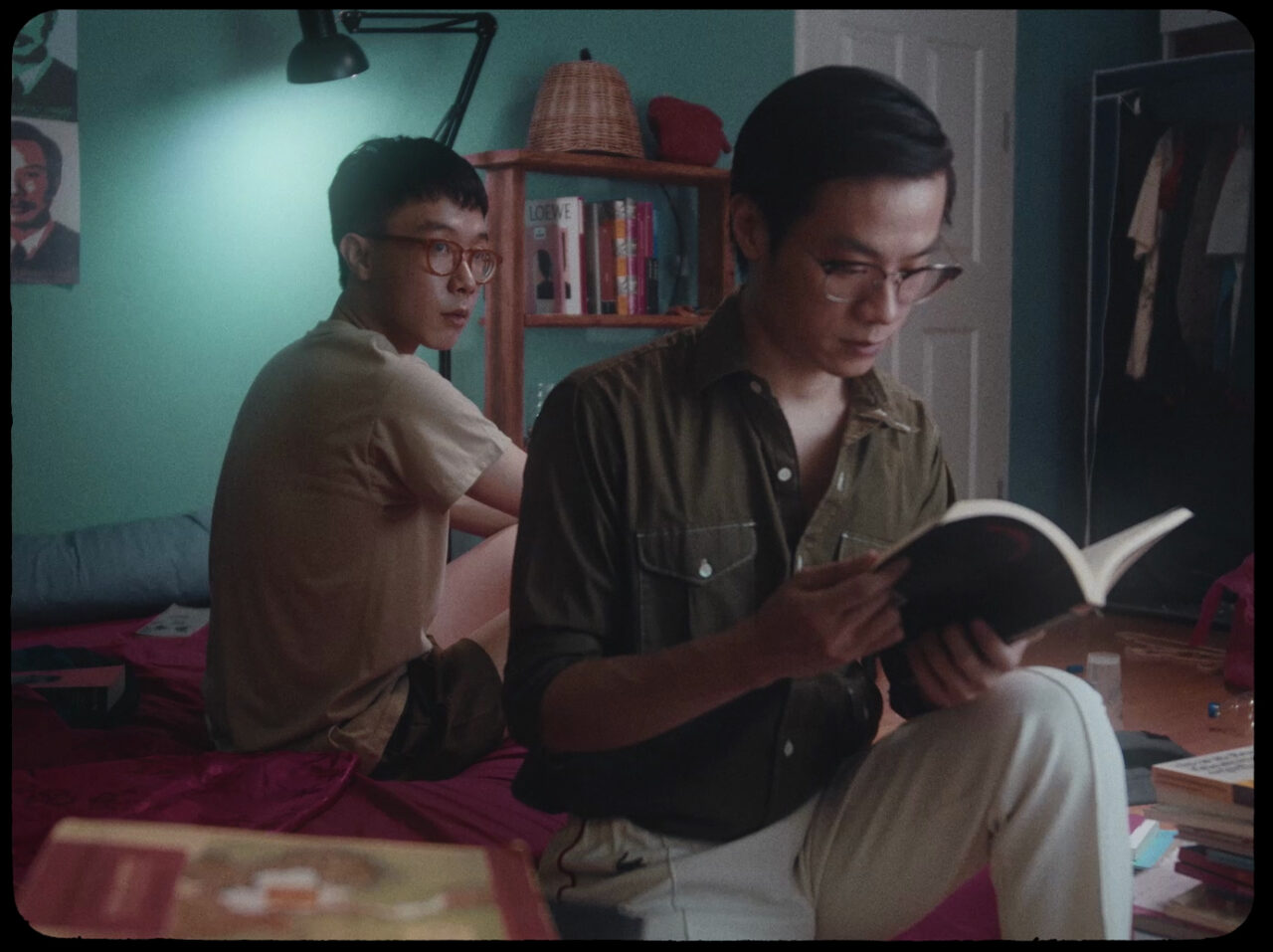 Holding Hands and Laughing Atop Eggshells

Red Aninsri; Or, Tiptoeing On The Still Trembling Berlin Wall

As we nestle under the veil of a lover’s embrace, away from the public’s eye, there are selves that can finally emerge. Selves that are dissonant, unformed, perhaps even alien to ourselves. Humour too, with its slippery nature that surprises, lubricates irrational circumstances and allows us access to circumstances that are otherwise grating. In Red Aninsri; Or, Tiptoeing on the Still Trembling Berlin Wall, a short film by Ratchapoom Boonbunchachoke, questions about about one’s real voice, and what it means to embody it amidst the state’s insidious powers are keenly buoyed by both intimacy and humour.

For the next 30 minutes, I follow Ang, a transgender woman who works as a spy and sex worker, and Jit, a cisgender male student activist and named “enemy of the nation”, as they try to navigate the sticky situation of disguises and political maneuvers. Jit holds information about a certain Miss J, who is wanted by the state for her entanglements that threaten Thailand and China’s relations. Ang and Jit’s first meeting is awkwardly funny — as their voices are obscured by voiceovers, their facial expressions too are rigid and uncertain. We see little of their bodies, only the upper half of their bodies are captured on screen. Even surprise is shown only through a slightly gaping mouth, delayed just by a few microseconds. This dissonance occurs throughout the film, as the characters seem to be constantly trying to match the clarity of the lines and roles they are assigned. As Ang rehearses her lines, she clears her throat and tries several registers of voices. None seems to fit, but she settles for a neutral baritone anyway.

During Ang and Jit’s first meeting, this dissonance between their facial expressions and the voiceovers becomes all the more apparent. Their failure to adhere cleanly to their assigned voices (and of course they fail) translates to an uncanny sense of displacement. As Ang and Jit spend more time with one another, this displacement also takes place within Ang’s psyche as she tries to maneuver her growing feelings for Jit and the impulse to serve her nation, which would require her to betray Jit. Where it is awkward, Ratchapoom pushes it even further to the point of extreme parody. It is funny in the way a wall is slightly skewed in a room, practically unnoticeable to the naked eye but felt nonetheless.

The spectre of surveillance too, is draped in humour, though in a more sinister register. Where humour lightens Ang and Jit’s first encounter, its interface with the state’s surveillance brings forth a grave violence that is unnerving. The Boss who barks orders at Ang is only heard through a radio transmitter, and speaks in a crass manner — when asked by Ang how they managed to find her, the answer was that they could even find their way into her vagina if they wanted to. The direct intrusion and callous disregard for her privacy is so affronting that I almost laugh, if only to diffuse the tension knotting in my chest. Humour not only processes vulgar confrontations, but cuts through the fat of sentimentality. Red Aninsri doesn’t take even its most tender moments too seriously, which makes it even more so disarming.

After a prolonged foreplay of chaste handholding and conversation, Ang and Jit finally make love. The reticence in their touches is endearing, especially so after we have watched them follow contrived scripts given to them for most of the film. In their intimacy, there is the near possibility of being free from the forces that orchestrated their encounter: but here is where Red Aninsri slices through any tinge of sentimentality. As their bodies entwine each other’s, a mysterious figure draped in black looms over their naked bodies, holding a durian and a radio transmitter as though presiding over some kind of sick ritual. And sick it is: Ang proceeds to betray Jit. Her mission accomplished, her voice lingers as repentance, as the screen brings us to a bed without Jit’s presence.

The film’s resolution lifts the veil of all previous pretenses, and flirts with the possibility of sincerity as we are presented with the characters’ real voices, free of voiceovers. But this resolution rings hollow even though we witness Ang and Jit finally reunite, in public this time as part of a presumably state-run Use Your Own Voice workshop. This feels yet to be another sick joke: just prior to this, Jit encourages Ang to use her own voice by first revealing his own. Where speaking in one’s own voice was a lover’s invitation to share in their real selves, it is now co-opted into the state’s agenda of creating a veneer of authenticity. The workshop facilitator’s insistence and encouragement that it is okay for one’s real voice to feel “not beautiful”, that we should embrace its imperfections because it rings “from our hearts” falls flat when it becomes clear that there are still restrictions and externally defined parameters as to what this voice should say. As the facilitator invites everyone to share their “love story” in celebration of their true voices, Mon, a fellow participant, shares a tender memory of letting his lover’s semen dry on his arm because he didn’t want to disrupt their postcoital glow. But it is “not love”, says the facilitator, promptly shutting him down. My heart sank alongside Ang’s hands, as she lowers them down just as she was about to clap in support of Mon.

Even when given permission to use their real voices, the characters walk on eggshells. The risk still palpable, Ang and Jit only express their innermost emotions through their mind, or speak to each other through their eyes. As they dance in the workshop space, cardboard egg containers functioning as makeshift sound barriers line the ceiling, a wry reminder that their voices are not yet free. Only when it is unknown to most of the external world, in their shared imaginations, that they are able to reacquaint their bodies with each other again. There is no humour here to release the tension caused by this dissonance, only a callous acknowledgement that it do be like that, as the film ends.