Video, masculinity, and power. These were three words that first came to mind after viewing Suerte by Carlo Fajarda and Joko by Suryo Wiyogo. Both use mediums of video, whether documentary footage, CCTV surveillance or video-like camera work within their short films. 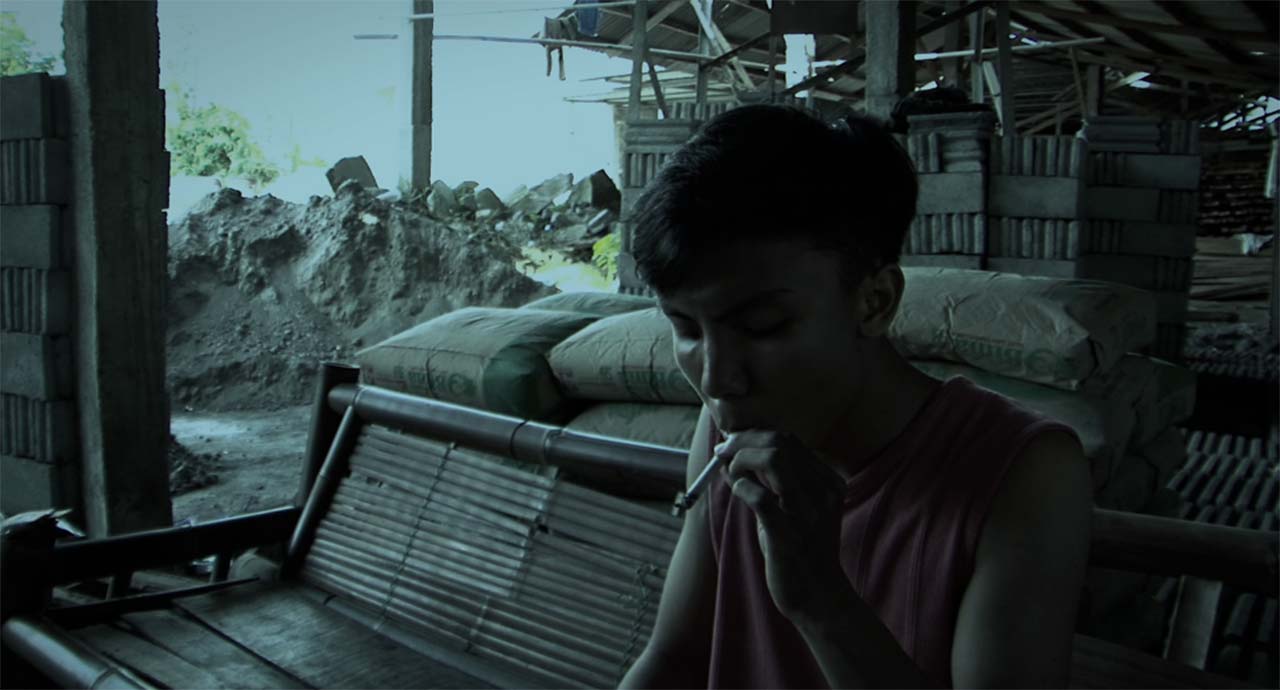 Video, masculinity, and power. These were three words that first came to mind after viewing Suerte by Carlo Fajarda and Joko by Suryo Wiyogo. Both use mediums of video, whether documentary footage, CCTV surveillance or video-like camera work within their short films. Both engage with male characters who find themselves in situations they cannot escape. The following article is a piece on how the two films respond to questions of form and feeling in dealing with stories of immense personal cost within structures of widening inequality and blatant abuses of power.

To what effect is video and camerawork used in Joko?

Suryo Wiyogo’s Joko opens with a grainy black and white video of workers sifting sand. There is no sound and it is not completely clear that we are watching surveillance footage until we see the character of the Bapak (boss, as “Sweety” calls him) monitoring the CCTV cameras on his computer screen. From here on, until the last sequence, each scene is filmed in one continuous, hand-held shot. The continuity and intentionally humanized camerawork achieves stylistic effect and emotive response from the viewer.

The camera lens follows Wiyogo’s characters as an invisible participant observer, varying its pace and perspective. For example, when Joko delivers lunch it follows him in and then lingers almost hesitantly at the door frame. When the Bapak goes to visit Sweety at the hardware shop, the camera follows him into the entrance and then splits – travelling through the store’s narrow aisles independently. We hear the characters; dialogue before the camera eventually arrives at a side view of the desk. Other times, it peeks over the Bapak’s shoulder or sits and observes whenever Bapak gives Joko a gift (a cigarette or lunch) and then orders and demands something of him. In that crucial scene when Joko clears the lunch tray, the invisible participant observer only shows us the scene from Bapak’s eye level sitting down, it stares indulgently at Joko’s bum and then at his upper thighs. When such a participatory view is adopted by the camerawork in such an exploitative situation, it feels unjust and uncomfortable – as if we are silently colluding with Bapak, just by having the power to watch and surveillance the disempowered character Joko whose majority of lines consist of “Iya, Pak”, or “Yes, sir”.

Suryo Wiyogo’s juxtaposition of impersonal surveillance footage with a subjective lens gives a sense of authenticity to a situation of power and exploitation that I think both Suerte and Joko strive to do in different ways.

To what effect is video and camerawork used in Suerte?
Whenever the idea of busting a drug racket crosses the mind, we think of a documentary. This has been rooted in our minds because of Hollywood crime movies, which tend to use handheld cameras during the climactic scenes, wherein the illegal deals are busted. Hence, that’s how an illegal transaction is envisioned by us. Carlo Fajarda hit the right mark by picking up on the idea of a documentary on a subject that incites a sense of thrill. Since every viewer is curious to know the insides of a drug scandal. The fact that this is shot at night creates a sense of secrecy and suspense which helps set the mood and atmosphere.

The shaky, fast paced camera becomes the viewer’s eyes, it makes us feel nauseous, but it heightens our sense of emergency, through most of the movie. For instance, when we see Betong’s interaction with the boss. It is unnerving because we feel for the filmmaker and Betong. The use of the fish eye lens and the idea of the hidden camera,  in this particular scene helps heighten the intensity. The camera angle used when Betong is in his girlfriend’s room, a low angle shot, works well in order to establish the tension and secrecy of what Betong is dealing with.

The use of such clichés are employed effectively when placed in conjunction with young boys – which speaks about how the boys were forced to grow up too early. This makes is disturbing and hard to watch, towards the end.

The characters who employ this camerawork are the two filmmaking students. As a viewer, we do not register the fact that they are possibly there, until we see them. Which effectively adds another angle to the story. It helps establish an alternate perspective, . because now, the fourth wall is broken and we are taken into the story. We cannot place ourselves out of the story anymore. Due to which we sympathize with the characters on a different level altogether, making the film feel authentic, since we taken along in the journey.

How does Joko explore themes of masculinity and power?

Masculinity and power are often hackneyed, broadly explored themes that reconfirm popular images and performances of what both of these terms entail. Joko broaches the oft hushed topic of male exploitation and sexual assault of other males, and involves the collusion of a coquettish woman (“Sweety”) whose main motive in the film is to unashamedly pimp a 15-year-old. The film begins with the Bapak giving Sweety instructions to give “Andi”. By the end of the film, Andi is instructed to murder a noncompliant business partner, and tells him to share the money with the workers, effectively incentivizing violence and forcing collusion. The older men shovelling sand are of no interest to the pedophile Bapak – they help to maintain stratified structures of male power and dominance through their labor as “workers”. Joko however, is an “unexperienced child”.

It was unnerving to watch Joko’s reaction to the harassment he was subject to; with his head bowed and with a nervous laugh, “Iya, Pak”. Characters like him never really had the privilege of choice – the little gifts and flirtations were mere games in the buildup of Bapak’s assured conquest. Through Joko, Suryo Wiyogo depicts the insidiousness and invisibility of coercion between men with vastly different access to agency. This contrasts with Betong from Suerte, who to some extent, takes matters of power and economic gain into his own hands. Betong wields influence both in his family with Roel, as well as in his wider community.

However, Betong’s comparative agency is still circumscribed under a larger structure of exploitation and the threat of endemic drug violence.

How does Suerte explore themes of masculinity and power?
Betong and Roel, saw too much too soon. They were exposed to the ugly side of the Philippines – one that involved murder, drugs and vice.

Every teenager is rebellious and wants to find their own way. Especially when there is a lack of a parental figure. We do not see anybody else in the house except for their mother. Her face is not revealed and we see her being lied to. This case of dramatic irony, wherein we happen to know more than the mother, makes the viewer feel bad for her; but at the same time it highlights her lack of control over them and her ignorance of the situation. Which serves as encouragement for them. Lying to their mother makes them feel more in control and possibly the ‘man’ of the family, who is not required to do what he asked to. I feel so, because we do not see their father, which perhaps makes Betong want to take that position.

Another reason, is money; which coupled with the rebellious spirit of a teenager is a dangerous combination in such a setting. They are not very well off. Which makes the young boys desire for more money. This incites the early stages of Betong’s desire for power, which he feels he has and so does his brother believe. Having being exposed to corrupt men, Betong and Roel, have picked up on their qualities and activities. Roel, smokes, for instance, which clearly no teenager should.

Betong, is an Anti-Hero, who is shaped by his circumstances. He does it for his brother and it is painful to see how it ends for him. Both the characters want to grow up and become the men the see, too early in life.

Both Joko and Suerte are centered on pertinent issues involving masculinity and power dynamics that stretch across age, experience and socio-economic inequality. Wiyogo and Fajarda infuse the narrative structures of their short films with different mediums of video, giving an intentional rawness to their camerawork and helping to develop senses of authenticity in characters and settings. Watching these two films, we feel as if we have been drawn in by the camera lens and viewing becomes experiential, sometimes voyeuristic, and often uncomfortable. This discomfort lingers on after the credits roll – and kudos to that, because viewing and being able to see is a form of power and the question becomes; what do we do with it?