Amiable, easy-going and unreserved, the director of Dahdi/Granny speaks to us about her ‘homecoming’ film, illuminating on her inspirations and experiences. 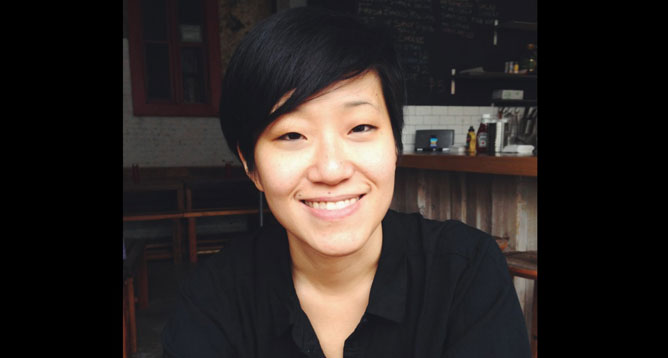 Born and raised in Singapore, Kirsten Tan’s globetrotting adventures in filmmaking have brought her to South Korea, Thailand, and New York, where she pursued a Master’s in Film Production at the NYU Tisch School of the Arts.
Her previous shorts, including 10 Minutes Later (2006), Fonzi (2007), and Sink (2009), have won international accolades.

Amiable, easy-going and unreserved in her quick-fire responses, the director of Dahdi/Granny speaks to us about her ‘homecoming’ film, illuminating on the inspirations and experiences behind it.

If Dahdi/Granny were a Southeast Asian dish, what would it be?
Rojak – the dish is a mishmash of ingredients much like Dahdi with a confluence of culture and language. In the film, there is a Malay neighbour, a Chinese old lady and a Rohingya girl and they all come together in a single location and connect with one another despite the cultural differences.

Tell us about the inspiration behind your film and your take on the Rohingya situation.
This is my graduation film for NYU. I wanted, in a way, to come home to Singapore. At the same time, because I’ve been away for so long, it’s hard to think about anything that is not about Singapore. So I came across this piece of news, and somehow I felt very angry. It’s sad to see that despite our affluence, we’re not able to help [the Rohingya refugees]. I know this piece of news was actually not very well publicised in Singapore. It’s almost like a genocide that’s happening right now.

What happened was their boat sunk somewhere in the Bay of Bengal, and then a cargo ship which was en route to Singapore picked them up. So they’re not just refugees, but also survivors. But when they reached Singapore, instead of giving them medicine, [the authorities] just kept them in a space for three days. After that they let them go without food, medicine and shelter. It was definitely within our means to be able to do something small, as humans, to help them.
So when I saw that news, I wanted to do a film about it. I distilled the essence of the issue into a moral and ethical one, in how the police are simply doing what is right, legally, but not morally. That’s the main idea behind my film.

Granny’s performance came across as comfortable, sincere and moving to me – is the actress a native of Pulau Ubin?
She actually lives in Pulau Ubin, and does some very tiny farming on the sidelines. She’s the only person [out of her entire family] left there – her daughters, her sons have all moved to the main land.
Her life is really simple, but quite profound. It’s like walking on concrete as opposed to living on soil. I mean, for us, we are just born into concrete, but for her, she’s just not used to walking on concrete ground.

So can we see Granny as an ‘outcast’ too, similar to the displaced Rohingya fugitive?
I think the film asks fundamental questions that we don’t even think about. Yes, I feel that Granny is also a ‘social outcast’ herself, in how she’s not able to keep pace with modern living. I tried to set up several subtle parallels [between Granny and the Rohingya girl] in a way without being too obvious.

Tell us more about the parrot in the film.
The parrot I borrowed from a pet shop. When we wanted the parrot, it was such a logistic hassle to bring it on the island! They control their species very carefully. The parrot was an animal that I felt was suited to Ubin – I thought it just added some kind of life and sparkle to the place. It brought out the old lady’s loneliness as well.

I noticed Singapore Panda (2013) playing on the television in the background. Apart from being a homage to Sun Koh, what do you hope to achieve with this?
For me, Singapore Panda wasn’t so much of an influence, but I thought the key themes of it aligned with Dahdi. I knew when I was reading up on the forums about the Rohingya issue that there were two groups. Basically, people on my side were going ‘Singapore should have helped’. The other school of thought went, ‘Singapore is already so overpopulated, come here do what, steal our food’. So the themes of migration and foreigners brought up in Singapore Panda are also taken up in Dahdi.

What is the one film you would save if your house was on fire?
Ingmar Bergman’s The Seventh Seal – since I think it’s a seminal and iconic work of cinema. If this were the final existing copy of the film on earth, I think it might be worth diving back into the fire to retrieve it.

If you could work with one person, alive or dead, who would it be?
Roy Andersson – I’ve always loved his films for their humour, style and tone. He is also a master of mise-en-scène and it would be amazing to visit one of his highly choreographed sets.

Can you describe your film in a tweet/hashtag?
#moraldilemma.
Find out more about Kirsten Tan here.