The Imminent Immanent: A Chat with Carlo Francisco Manatad

When Typhoon Haiyan struck the shores of Philippines five years ago, Carlo Francisco Manatad knew he had to make a film for his hometown, Tacloban.

A familiar face at the festival, Carlo’s films Employee of the Month (2017) and Junilyn Has (2015) have also been screened at SGIFF’s Southeast Asian Short Film Competition in the past years.

In his latest short film, The Imminent Immanent, Carlo illustrates the duality of  indifference and unity that the people have towards an imminent typhoon, which is a common occurrence in Philippines.

The Imminent Immanent adopts a similar mood and tone to his upcoming feature film Whether the Weather is Fine, which is slated for release in 2020.

Via an email exchange, I spoke to Carlo to find out more.
Adora: Hi Carlo! Is The Imminent Immanent an extension of your upcoming film Whether the Weather is Fine? Can you tell us what the main similarities and differences between these two films are?
Carlo: Basically, The Imminent Immanent is a companion piece to the feature film, Whether the Weather is Fine, but it is also an independent piece. I do feel that the short film gives a brief preview of the mood, tone and feel in Whether. Both are in the same universe of the mundane and the absurd. The disparity and the collectiveness of the characters and the elements present before and after the typhoon strikes my hometown, Tacloban. There are themes of ambiguity, questions of justice, relationship and so on, but are presented in an ellipsis manner.
I didn’t set out to create such a specific association or totality of connection to the film as per its milieu. However, the characters that are present or absent, are also nonchalant about “another” imminent storm.  They leave a strange feeling of questioning and an emotional journey that leads up to Whether.

A: In your film, are you depicting what happened before Typhoon Haiyan, where the people of Tacloban were oblivious to the imminent typhoon, or were you portraying their oblivion to the next possible natural disaster?
C: “Oblivious” may be an upsetting word to describe how they act and react. It is a sad fact that in my hometown, Tacloban, storms come and go. And people may seem to react dispassionate about it, but they really are not. It is a fact that being anxious would be the first reaction with everything that would come upon them but being anxious wouldn’t change the fact and help them to survive another disaster. So, they do react towards this as an almost normal form of pursuit and how they move is their way of being one step ahead of being prepared for a disaster. It is a desolate and wretched reality that these people have to face. The short is very particular and not as well, the situation presented – I needed to create a specific mundane world but with no specific rules so the characters can freely move and react to what is about to come.
I also needed to project how the “monster” the typhoon is a “monster” in the most impactful way possible, but also in a simple manner so that it doesn’t not overshadowing how the characters and other elements of the film are in their its own states.

A: As the title suggests, there are references to religion/spirits in your film. How important are religion/spiritual beliefs to you and your family and friends?
C: I would talk about religion in a general sense. The Philippines is culturally religious to say the least. As such, I do feel and think that religion plays a big role in shaping how belief is written in the minds of not only these characters but also among Filipinos in general. This is where they look up to when everything is gone, when you have nothing.
While religion is here to stay, it sometimes gets too absurd when people tend to just believe, instead of acting towards their current state to achieve what they want.

A: Towards the ending of the film, I noticed the use of archival footage. Is the footage taken by you during Typhoon Haiyan? Are the photos of you and your family and friends?
C: The footage was taken during the storm and the photos presented in the film were my childhood photos. It was a process where I tried for me trying to make sense out of thisan almost nonsensical short. It came to a point wherethat the film was finished but still wasn’t – at least for me. So I went back to the grassroots; of how I wanted the film to be. I realised that this film was the most personal one, but it felt very distant in its approach, where I tried to fictionalise the experiences of the people presented in the film. Then, I realised it was me that was the missing piece of the film.I then decided to just bluntly put myself in.This may sound tacky but it was then that I felt the film was complete.

A: Since Typhoon Haiyan, how has your relationship between you and your family and friends in Tacloban changed?
C: It’s both the same and different. I’ve been studying and working in Manila for the past couple of years maybe as a form of escape since I have this weird relationship with the people of Tacloban and also the place. But right after the storm happened, I felt that there was the need to be more connected and just let go of my inhibitions or suspension of relationship with both the place and the people. Now I feel there is this need to open up more and just stay true to how I have been all throughout the course of growing up in the place that I knew was only made important after the disaster happened.
Catch the Asian Premiere of The Imminent Immanent as part of Programme 1 of the Southeast Asian Short Film Competition on 7 December 2018, 7pm with director Carlo Francisco Manatad in attendance.

What is Presence? And Other Lessons From Carlos Reygadas 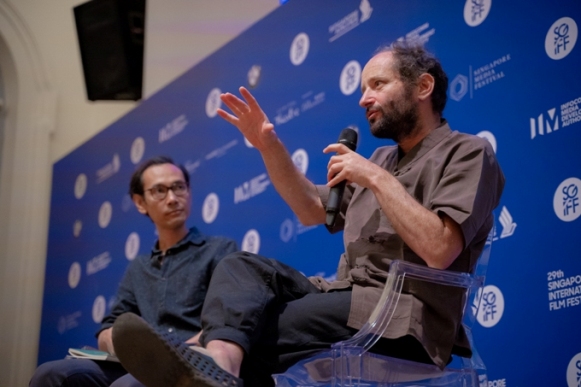 What is Presence? And Other Lessons From Carlos Reygadas