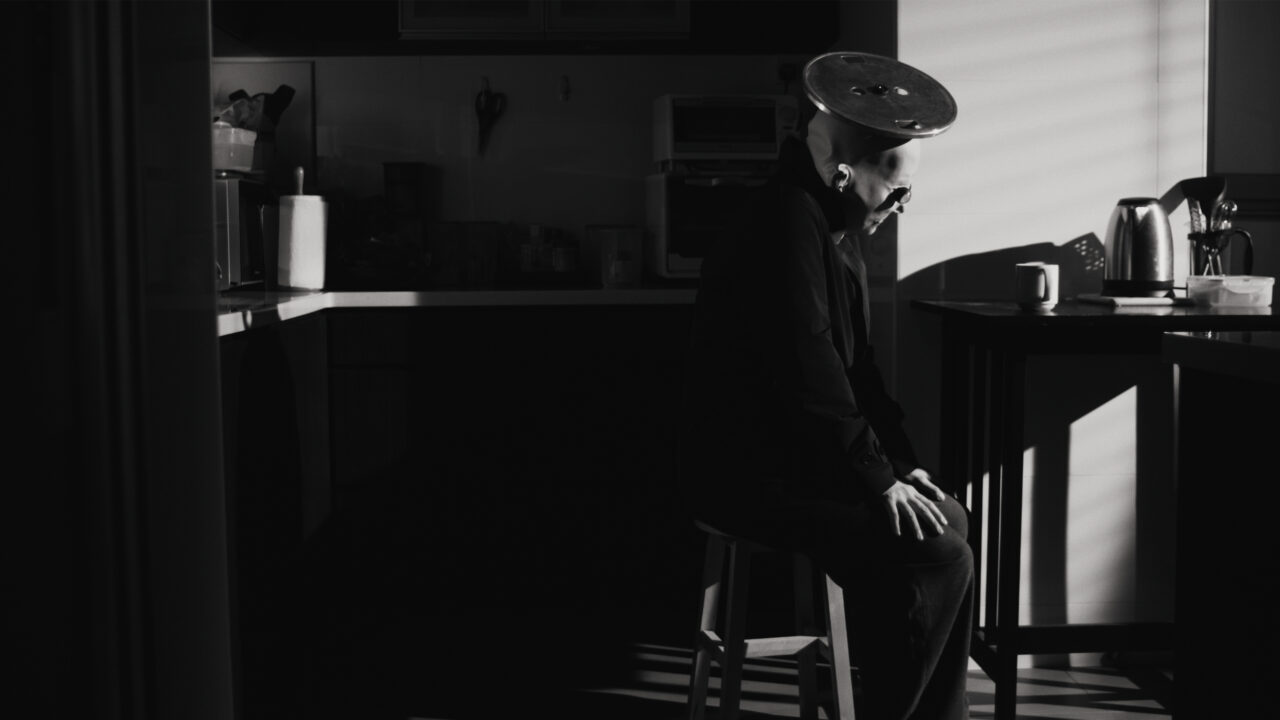 This is a story about a person making a cup of coffee — but then again they aren’t really a person, and it’s not really a cup of coffee. Compounded by its aesthetic, this ambiguity lends The Cup a deliberate flatness that simultaneously intrigues and alienates.

Person or not, what’s certain is that our main character has a brewing machine for a head, and seems intent on making a good cup of coffee. With buttons for eyes, a rubber mask for a face, and a halo-like disc with screws attached to the head, this character is created in live-action with real-life props, purposefully uncanny in the way they appear almost human, but creature-like too. They have a routine for making coffee: little pellets come shooting out of the top of their head, and they collect and then ingest these. After that, the character unscrews their left eye-button, and liquid comes streaming out of a nozzle hidden underneath the eye. All this is complete with brewing sounds: the hiss of steam, the vibrating of the machine, the liquid flowing into the titular cup. There is an abstraction happening here, or a recasting of the familiar onto a foreign body. Routines many of us partake in — brewing a cup of coffee, complaining about the taste of the terrible coffee, dozing off, shaving — are pipetted from daily life and mapped onto this uncanny caricature of a human.

But as familiar as these routines are, there are clear artistic choices that serve to reduce the relatability of this film: that it is monochromatic, often with stark contrast and crushed blacks, makes the character and what would be the familiar setting of a flat even stranger and more alien. This is supplemented by cinematography that often displaces the audience. We are placed in strange and sudden points of view, in shots that purposefully disrupt our comfortable sense of being a fly on the wall: long, angled close-ups of the disc on the character’s head, or a bottom-up shot from a sink with them looming over us. There is even one where the camera seems to be inside the cup as the character takes a sip. These are jarring in their deliberateness, complicating the relatability of actions as simple as drinking some coffee.

Moreover, the character talks to their own shadow in Teochew, and the shadow replies in Cebuano — are they talking to themselves? Is the shadow a separate entity? Why do they speak different languages? There are no clear answers for these questions. Yet, if that strangeness is put aside, their conversations are familiar. They begin with an everyday gripe about “terrible” coffee, to which the shadow responds “Oh… why’s that?” and “What to do then? You sure there isn’t a problem with your tongue?”. Their second conversation is similarly banal: “How’s it taste now?” and “What happened to your ear? You okay?” Together, these sound like conversations over cups of office machine coffee between colleagues in the break room, polite, light-hearted and uncritical. Their last conversation even ends with the main character standing up, saying, “Ah… I guess that’s about all there is to say. Okay, time to get back to it.” In sum, there is a layering of a mundane, familiar conversation over the absurdity of a creature with a coffee machine for a head talking to its own shadow. That is, the film works to keep us at arms length, by wrapping the familiar in the absurd.

Yet there are moments where we are violently yanked into the film. This is particularly notable when the character is cutting black growths off their face — which can only be interpreted as shaving — and accidentally cuts their ear. There is a jerk, black blood spatters in a white sink, followed by no sound but the character’s harsh breathing. Coming from the removed mundanity of the previous scenes, this is not only a violent change in pace, but also a disruption of our alienation towards the character that had been set up till now. The blood, the hissed, pained breaths — we instinctively wince in sympathy, and in the space of a moment this uncanny alien of a character had turned human in injury.

Person but also not, alienation but also not, relatability but also not — only context can make sense of this strange ambivalence. On their production company Emoumie Pictures’ website, Chua and Lam disclose that The Cup was made during Singapore’s COVID-19 lockdown period, to interrogate the “flattening out of life” amidst the pandemic. That is, it is an abstraction of the mundanity of a stay-at-home notice. Shut away from the world, personhood and humanity seem to be suspended. Life seems very much like a terrible cup of coffee — but for that, The Cup offers up some solace. When the character sticks their coffee-machine-head out the window to collect rainwater, they report that the brew changes. Where it was before “too bland… just isn’t any good”, coffee brewed with a change in routine seems to be “stronger” and tastes better. In other words, amidst this (un)familiar mundanity, some variety is in order.