What audiences thought of Programme 1 of the Southeast Asian Short Film Competition.

“We can’t talk about films without talking about pleasure,” commented Dr Victor Fan, mentor to the 15 of us in the Youth Jury and Critics Programme 2018, and Senior Lecturer in Film Studies at King’s College London.

It was our first (Skype) meeting with Victor and we were greeted with his friendly eyes and candid personality through the six screens of various sizes hanging on the walls of an otherwise typical tutorial classroom in NTU. Though it was a rather casual chat, what Victor said was far from a passing comment and it stuck with me throughout the course of the festival.

I’ve almost always favoured films that allowed me to identify with its characters. The more I am able to empathise and feel, the more the film resonates with me. I admit, it’s a personal bias but it also made me think, if I find pleasure in identifying with who and what I see on screen, what happens when there are no faces or no human-like personalities in a film? What kind of pleasure is one able to find in such a viewing experience? How does this shape the way one appreciates more abstract or experimental films, films without a conventional narrative structure?

With History In a Room Filled with People with Funny Names 4 by Thai artist and filmmaker Korakrit Arunanondchai is a film that confused me at first viewing, not because it needed much effort for me to make meaning of the film, but because there isn’t a face or personality on screen for me to relate to. This is no A Room with a Coconut View by Thai artist and filmmaker Tulapop Saenjaroen, where despite the lack of a human face, the film offered two very human-like personalities – the voice of a tourist named Alex and an automated audio tour guide named Kanya.

From films by acclaimed American director David Lynch (Lost Highway and Mulholland Drive) to films by Belgian-born French feminist director and documentarian Agnes Varda (Sans toit ni loi, Visages Villages), many great films have questioned identification in cinema or even challenged the audience’s ability to identify with characters and faces.

In With History In a Room Filled with People with Funny Names 4, we’re introduced to Chantri, an invisible protagonist whose character is as elusive as memory and mortality, the film’s subject matter. Chantri’s role in the film is not for the audience to empathise with her. She is there to question us and make us think, as I soon came to realise upon the second and third viewing of the film.

During the film’s screening at the National Gallery on 7 December, audience members whispered among themselves, asking one another questions like “what does this mean ah” and “what’s going on”. They chuckled at the visuals of mating apes and a growing giant rat (which I later learn has outlived the humans in the film by feeding on their decaying matter and on that which has destroyed them) and laughed when what they thought was the end of the film, was merely a cut to a temporary black screen.

Alif, 24, who was among the audience on screening night, thoroughly enjoyed the film, despite being unsure of the fragmented story or the filmmaker’s intention.

“I thought it was a very abstract piece of filmmaking. It was refreshing after two fairly conventional films (Elinah and Gold) that were honestly rather mundane in terms of subject matter. I enjoyed the ambitious and grandiose nature of the project, touching on topics such as death and reincarnation in its dual narration,” said Alif, citing it as his favourite film in Programme 1 of the Southeast Asian Short Film Competition.

As a visual artist, Arunanondchai’s works attempts to engage with his audience in a way that isn’t unidirectional, as with his other four films in the five-part collection. With its semi-documentary treatment, With History In a Room Filled with People with Funny Names 4 is a work that pleads for repeated viewings.

“An abstruse story that possibly requires repeated viewings is also a rewarding experience in itself, akin to solving a complex narrative puzzle where you notice something new each time,” added Alif.

Perhaps this rewarding and pleasurable experience of allowing the film to speak to us and for us to project ourselves into the film is what makes With History In a Room Filled with People with Funny Names 4 an enjoyable film. The film’s visual intertextuality grants us the freedom of interpretation, as much as it is a work that pushes us to think about the transient nature of memory and our human existence. Scenes showing the people of Thailand mourning the death of their late King are intercut with scenes of Naga, the serpent spirit, and scenes of drones as reincarnation of souls, all tied together by sounds heavy breathing.

Is it a satisfying story, if I may call it that? Maybe not. Is it an enjoyable film? Well, if my idea of pleasure is rediscovering a part of what makes me human – the ability to imagine, project and question – then I’m glad to say yes, the pleasure is all mine. 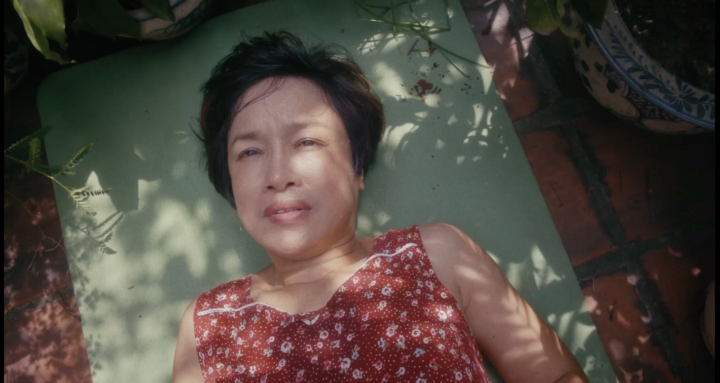 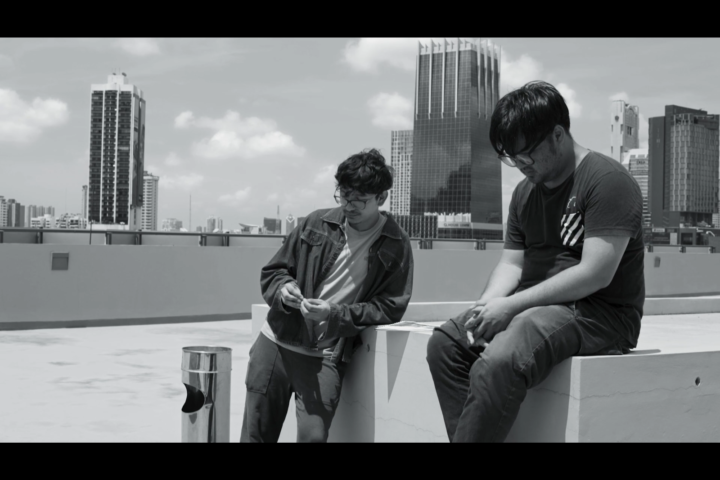