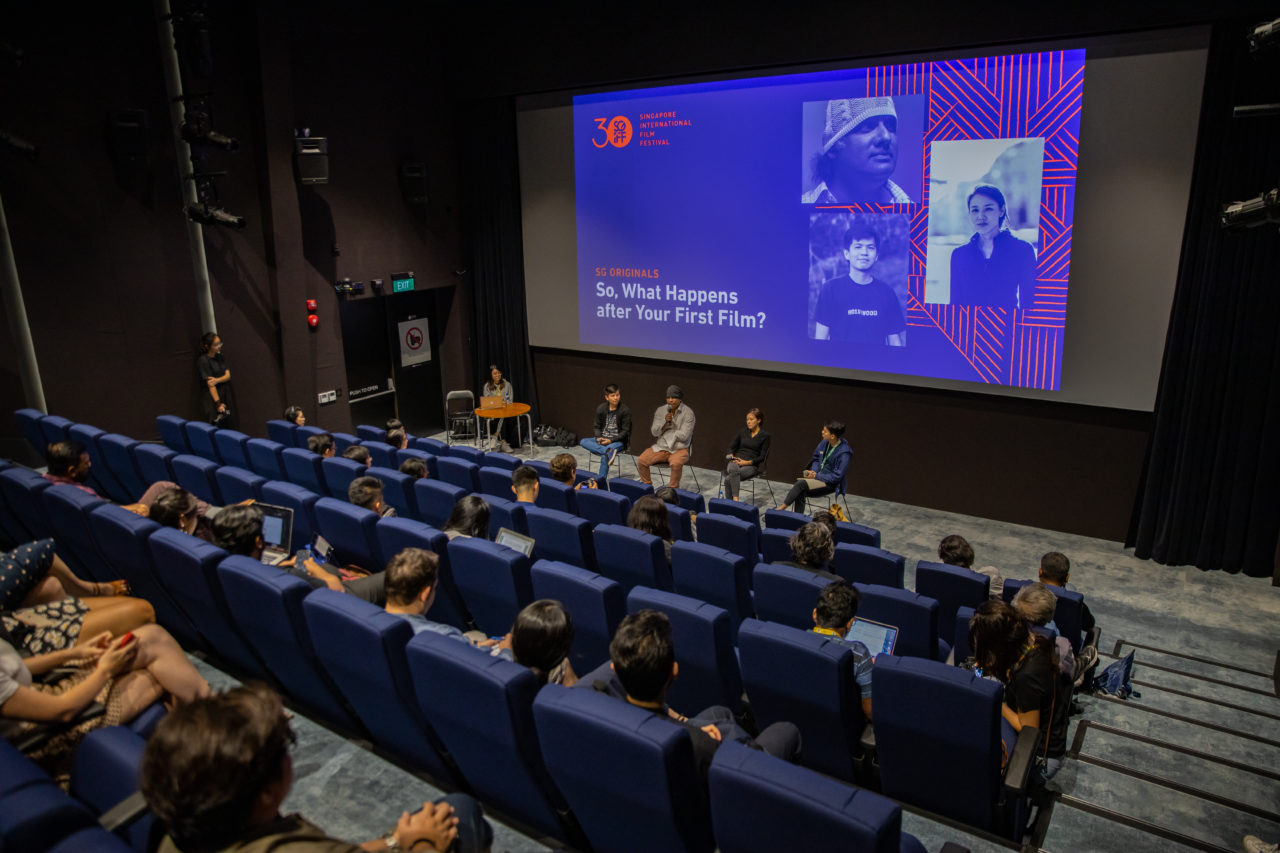 For aspiring filmmakers: What comes next after your first film?

Written by Charlie Chua
Photos by Foo Yong Chin and Jaslyne Chua
This article is a recap of the panel discussion, “Sg Originals: So, What Happens after Your First Film?” held on 23 November 2019 at Oldham Theatre as part of #SGIFF30.

For many aspiring filmmakers, the making of a feature-length film may seem like a mammoth task with many spending years just honing their craft through reading, writing and/or making short films – all in the hope of putting together a project promising enough to grace the 60-minute mark. Shoestring budgets, film festival deadlines, and demanding producers are but few of the many challenges that make such a task an uphill battle. Yet, the few filmmakers who achieve this dream may soon find a new peak to climb: what happens after your first film? Filmmakers K. Rajagopal, Jacen Tan and Wong Chen-hsi shed light on the trials and tribulations that they underwent when making their first feature films, and how they carried that momentum forward to their future projects.

All three have completed and released their own feature-length films in the last decade. K. Rajagopal is a veteran in the local filmmaking scene, with a background in theatre, film and television that spans over 20 years. In 2016, his debut feature film, A Yellow Bird, premiered at the prestigious Cannes Film Festival.  Notably, the talk was moderated by Jeremy Chua, who co-wrote and produced A Yellow Bird. Jacen Tan’s first feature, Zombiepura, was a box office success in Singapore cinemas in 2018. His striking use of horror and comedy in a local context earned him the title of ‘Singapore’s latest film funnyman’ by The Straits Times.

Lastly, Wong Chen-hsi debuted with a self-produced feature Innocents in 2012. Wong went on to win the Best Director-Asian New Talent Award at the Shanghai International Film Festival. She is now working on her second feature film, City of Small Blessings, an adaptation of Simon Tay’s novel of the same name.

Having gone through the gauntlet of making their first feature, the three started by discussing some key lessons that they took away from the experience. When asked about his time making A Yellow Bird, Rajagopal delved into the challenges he faced when trying to get the film off the ground. For one, the very idea of a feature film seemed so foreign to him prior as he “thought (his) filmmaking career was going to end with short films”.

In 2010, he was commissioned to direct a short film, Timeless, which would be produced by veteran producer Fran Borgia. Up to that point, he had only made seven short films and it was Borgia who then pushed him to develop a feature film. However, finance and the integrity of his stories were few of the many fears that initially held Rajagopal back from pursuing such an endeavour. Borgia continued to push him by insisting that “(he) wasn’t getting any younger”. Eventually, the story came to him in a dream, and he submitted his screenplay to the Singapore Film Commission for funding. Even then, it was no dream come true, yet.

“When I made my short films, I never thought about scripting and writing. A lot of my short films didn’t have dialogue. All of a sudden you needed to submit proper scripts with minimum 72 pages. It was a huge task for me to get a script out for a grant”. The difficulty of this task is further evidenced by the 10 drafts the screenplay had to undergo.  Ultimately, Rajagopal got the backing he needed, with Borgia returning to produce. Then came the next trial: production.

Rajagopal spoke of the challenges they faced when it came to realising the script. For one, entire scenes and locations were changed due to financial limitations, and such limitations pushed Rajagopal to rethink his plans all the time, which eventually made the film better.

Tan described a similar dilemma he faced when making Zombiepura. “(It) took 7 years, from when we first came up with the idea to when we shot and released it”. Of the seven years, five were spent applying for grants, trying and failing, and yet, Tan persisted. Eventually, his efforts came to fruition, though it brought along with it a new set of challenges.

“Initially I was naive. I thought all it took to make a zombie movie was to get some friends and throw some ketchup on their shirts. As I went along, (I realised) it wasn’t just that, but the craft of lighting and make-up, etc.”. Like Rajagopal, Tan had to rethink many of his plans and to “learn to write a contained movie – to make something work within limitations” as he went along.

Wong then offered her insights on the challenges she had faced when making Innocents, which had no financial backing. She recalled producing and funding the film all by herself, and when shooting wrapped and she ran out of money, she “worked and worked just to earn enough money to get the film into post-production”.

That was not the end of her troubles as without a producer or a sales agent, she was unsure of how to get her film into film festivals. She described the process as the “biggest learning curve”, and the greatest lesson she learnt was to have a producer to count on.

The filmmakers went on to describe what it was like moving forward from their first feature. For Rajagopal, he found it difficult to come up with a new story for a second feature especially with the newfound pressure that came with the success of his first. “I never wanted the pressure of making a new film. It’s a struggle –– some characters are just similar to the ones in A Yellow Bird”. Much like his first film, the writing process still scares him.

Tan gave his own piece of advice on writing, sharing that “(you have) to sit down and commit to writing. It takes discipline. That’s when ideas come to life. It’s (what) makes a project concrete. You cannot just keep talking about it”. For Tan, he writes with the budget and market in mind.

“You should have your next project ready to pitch or tell someone. You need to have your idea ready no matter which stage it is”. He adds, “everyone imagines the film differently, so it can be difficult to communicate your ideas” and for him, he imagines his films as posters before he even starts making them, which is his way of figuring out if it is a project that he wants to pursue, or not.

In contrast, Rajagopal and Wong believes in letting their ideas germinate. To Rajagopal, “making a film shouldn’t be an exercise of ‘you have to do it’. Telling these stories are very personal and must be an organic process”. For Rajagopal, filmmaking is a medium to convey “something deep inside” of him and not to make money.

Similar to Rajagopal, Wong struggled to come up with another idea as she believes that good and honest stories take time to find, and that it is important to have the filmmaker’s personal voice stamped onto the film. As such, Wong thinks that one must be “disciplined in telling people ‘no’. Telling people you need space”. Wong eventually found her story when she read City of Small Blessings.

For her second feature, Wong will no longer be running a one-man show with Borgia on board as producer this time. Wong shared that she now has to learn to trust people by taking a step back from certain duties, and to exert enough control without being overly controlling.

A larger team means more ideas, and the need to make compromises but Wong believes that “it’s about making the right compromises such that the film doesn’t lose sight of what it is conveying”.

Wong’s final words of wisdom, “make the film that is right for you at that particular time in your life” fittingly wrapped up the event. “Different things feel urgent at different points in your life. If you feel like making this now, then make it now. Because 20 years from now, or even just 5 years from now, you’re not going to be the same you. So, make it when you feel like it’s the right time.”