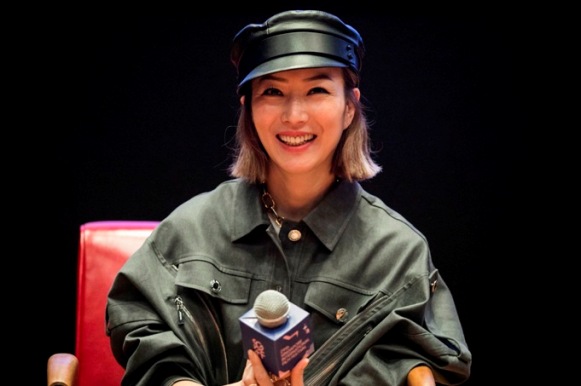 When Hong Kong actress Sammi Cheng, star of Stanley Kwan’s new film First Night Nerves, emerges from behind curtains, the National Museum of Singapore’s Gallery Theatre promptly erupts into cheers.
She is decked out in an oversized ensemble—a big black beret that slightly conceals her face, a large denim jacket, a second checked jacket casually draped over her lap—but it does not shield her from the effusive screams of the fans who throng the sold-out event. As I sit sandwiched between starstruck middle-aged women with manes coloured like their idol’s, and a younger male duo who voraciously video every second of the event, I am in awe of the excitement that has descended upon this space.

Cheng’s fan base is as dynamic as her career. She began as a singer at the tender age of 16 through the New Talent Singing Awards in Hong Kong, and moved into acting two years later, balancing her burgeoning showbiz career with her studies. Since then, her famous films have included Needing You (2002), which netted over HK$35 million in domestic box office revenue; Everlasting Regret (2005), for which she was a contender for Venice International Film Festival’s Volpi Cup Best Actress award; and Blind Detective (2013), which garnered her critical praise and (nearly) a Golden Horse Award.
This 7 December one-hour dialogue session with Cheng (and Kwan, a surprise guest) is part of an ‘In Conversation’ series organised by the 29th Singapore International Film Festival. Speaking with the stars, Danny Yeo, a local emcee and the moderator for this session, code-switches fluidly between English, Mandarin and Cantonese. While the crowd badgers Cheng to reply questions in her native Cantonese (though she proves just as fluent in the other two languages), Kwan lets a translator convey his words.

The session opens with a chirpy introduction of First Night Nerves, a protracted theatrical melodrama about two actresses vying to take centre stage. Kwan describes the film as a heady concoction: ‘eight women and a stage show’. Cheng offers her own interpretation: ‘This is a story about two women, [and] how to get rid of the past, how to get rid of pain, how deal with your hatred of each other and finally clear the air.’
In the 1990s, the speculated rivalry between Cheng and fellow Chinese singer-actress Kelly Chen famously peaked during the 1999 TVB Music Awards, with reports emerging of their mutual hostility. Cheng’s fans even hissed when Chen went on stage to receive the Best Female Singer award. In some ways, then, Cheng may be speaking from a very personal place when she describes the above themes. She has spent the better part of her life in an industry notorious for its cutthroat female rivalries. Now, as she builds upon her artistic legacy, it feels apt for her to express these sentiments through a medium she knows best: acting.
During the Q&A, Cheng’s fans eagerly discuss this performance’s potential for accolades. It makes sense, as the actress is known for a dubious honour—having the most number of Best Actress nominations without a win in the history of Hong Kong Film Awards. I understand: The fans want their 天后, their heavenly queen, to finally be recognised with a trophy or two. But Cheng declares that she has no expectations for awards, and does not think of them when she picks projects. Her only criteria? ‘As long as the script is good enough and the role is challenging, I will accept it.’
As the hour flows on, so do the questions, posed swiftly and relentlessly. When Irene Ang, local comedian, actress and founder of FLY Entertainment, catches hold of the microphone, she unabashedly pours forth her admiration for Cheng, until our moderator has to check her for a question. Yes, there is one: How does Sammi Cheng stay relevant in an age where stars are as replaceable as they are venerated?
Cheng’s answer is aphoristic: ‘Never set any boundaries for yourself. Keep exploring new things, keep absorbing things. When you [want to] do something, don’t be afraid—just do it. Let yourself be your biggest motivation.’ These words sound abstract to me at first, but I consider the trajectory of Cheng’s career. Who better to take advice from than someone who, after a meteoric ascent, has managed to keep buoyant over the last three decades?

When Yeo announces the end of the session, fans pluck themselves out of their seats in hopes of stealing photos with Cheng. Alas, security is quicker than they are, and ushers her backstage. In the wake of her hasty departure, I am reminded that a chart-topping silver screen diva earns her status not by being chummy with mere mortals, but by continuing to reign superior over us.
– Eisabess Chee
Photographs by Chrisppics+.

Where Are You From?
Featured, Festival Blog

Where Are You From?

The Political, The Personal & The Ugly Truth
Featured, Festival Blog