Welcome aboard SGIFF’s New Waves! For this third annual edition of the screening and dialogue series, we invited bright young minds from the festival’s Youth Jury and Critics’ programme to offer an introductory analysis on the four featured filmmakers, report on each session, and generally guide you on this voyage of artistic discovery.
“What do you want to be when you grow up?”
While some struggle with this question, veteran television actor Andie Chen found his answer at the ripe old age of 11 and has never looked back. Meanwhile, seasoned director Don Aravind dived headfirst into filmmaking at 14 when he started playing with video cameras.
The second session of SGIFF’s New Waves 2018, entitled ‘Sustainable Idealism: Realities of Filmmaking’, saw a dynamic discussion between the two professionals, lifting the veil on the inner workings of our local television scene. After screening three of Aravind’s shorts (Ren Shao, 2012; Vote, 2015; Angel, 2017), we were guided through the struggles and realities of working in the film and TV industry in Singapore. Coming from acting and directing backgrounds respectively, Chen and Aravind provided different perspectives on the creative life. Here are some insights from the 30th May session at *SCAPE.

‘I think Ren Shao taught me one lesson, which was to be very honest with your work… I just wanted to put my soul into it.’

– Don Aravind
Aravind’s honesty and humility shone in his films and his candor during the dialogue. He said he still cringes when others call him a filmmaker, despite having more than 25 short films under his belt. His short films are born out of an insatiable itch for telling stories ‘from his memory bank’, allowing him to draw directly from personal experiences.
In fact, Aravind mentioned that he usually avoids screening his award-winning short Ren Shao because of how raw and personal the film remains to him. However, he attributes Ren Shao’s success in festivals to that same truthful quality. Ren Shao remains his most widely travelled film.

‘I thought, OK, maybe [Ren Shao] was the chance, you know? Maybe they were going to give me a job. That didn’t happen.’

– Aravind
Fresh out of film school, Aravind was hungry for work. Yet his big directing break only came two years after, when he found himself writing, producing, and shooting a documentary for a local TV station. The scheduled director failed to show up one day, and that void became the opportunity Aravind had been waiting for. He put his ‘whole life’ into the project, and his episode was so well received that Aravind eventually went on to take over as director for all 12 episodes of that season.
Now, Aravind strives to make one short film every year and uses it as an opportunity to channel his creativity while taking time off from work. Although he admits that it is increasingly hard to squeeze out the necessary time and money, Aravind still revels in the prospect of rekindling his filmmaking fervor.

‘Once I finished NS, I knew I was going to try and get into the industry. So I did everything I could—really everything, from extra work to part-time.’

– Andie Chen
While both director and actor agreed that there is always demand for new talent, the nature of the industry does not easily allow for fresh talent to be discovered. So Chen advocated a more proactive approach: ‘Keep emailing [casting directors]. Don’t do it once—do it five times, 10 times. Be polite, but be consistent.’

‘If you want to pursue this professionally… I think you need to know more than just film.’

– Aravind
Aside from meddling in architecture, interactive media, and other non-film things, Aravind worked part-time at TheatreWorks, an independent, international performance company, over four years while in university. During his time there, he helped to archive 20 years of theatre production and watched more than 1,800 theatre shows—‘and that changed my world and my mind… I think that was my film school.’
He also received sage advice from his guru, Singaporean director TT Dhavamani, who encouraged him to learn and be more sensitive to life.

In the face of industry disruption, both Chen and Aravind share similar sentiments regarding the way forward for film. Both speakers advised media practitioners to adapt to the changing environment and get used to the mixing of mediums. Aravind pointed out that it has become a challenge for directors to limit themselves to only directing TV, commercials, or film—noting that ‘even Eric Khoo is doing TV stuff’.
Join SGIFF in the next installment of New Waves as we dissect culture, identity, and mythology with filmmaker Amanda Nell Eu and artist and writer Tania De Rozario. They’ll come together on June 27 in an attempt at answering: Who, or what, is the Pontianak that resides within?

For full information on upcoming New Waves events, click here.
Martin’s love for filmmaking began when he was put in front of a camera as a favour to his friends. He now juggles his passion for acting, filmmaking, and coffee when he isn’t off chasing his three cats to bed. 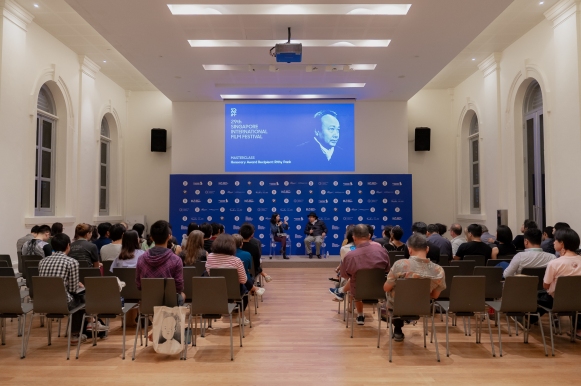 The Pathology of Ballad of Blood and Two White Buckets
Featured, Festival Blog