Occasionally, a short film can feel like a mad prophet rushing into a cinema, saying something unbelievable, in the hopes that someone will listen. Singapore-born filmmaker Chiang Wei Liang makes one such prophecy—that the territorial bickering over disputed waters in the South China Sea distracts us from something infinitely more sinister: nuclear energy and its ramifications for the region.

With Taiwanese citizens voting in last week’s referendum to abolish a legal provision mandating that nuclear energy be phased out by 2025, Chiang Wei Liang’s short film Luzon (2018) might be more urgent and prophetic than ever. We encounter a Taiwanese fisherman and a Filipino fisherman bickering at sea. They make sparse but agitated gestures about sovereignty in their own native tongues over a Chinese nuclear waste barrel which has floated into their fishing zones. Astute viewers who follow the geopolitical situation in China would not miss the Taiwanese-based director’s attempt to locate a political conflict within ordinary human situations—Chiang has done this in Anchorage Prohibited (2015), where his characters (Vietnamese migrants to Taiwan) figure as part of a larger comment on transnational, intra-Asian migrant labour issues. But to focus purely on territorial disputes would be to miss half the point.

“I always thought of it not as a geopolitical issue—it is an eco-political issue,” Chiang clarifies as we discuss what issues the film attempts to tackle. He brings up the fact that the building of nuclear reactor sites on China’s eastern coasts, where typhoons often land and earthquakes hit, could harbour dangerous consequences for the region. In fact, by marrying the ecological and geopolitical perspectives, Chiang’s film delivers a high-definition vision of how maritime claims are inextricably bound to nuclear ambitions. The nuclear barrel at sea that triggers the fishermen’s arguments might remind us of a startling reality: the recent launch of Russian offshore, floating nuclear plants in the Kola and Yamal peninsulas. Dubbed by environmental groups as a ‘Chernobyl on ice’, this prospect raises the hairs of profit-driven institutions as it does the hairs of coastal residents—for very different reasons. However, it should remind us of a reality that may not have arrived, but looms like a heavy cloud—China has been planning for floating nuclear technology for more than two years. More immediately, the film also invites us to think about the management of nuclear waste and its relation to the ocean. Such decisions made seemingly far-off in the higher echelons of politics can cost the livelihoods of fishermen in the film—the Filipino fisherman slices open fish after fish, slathered in radioactive green. It could literally cost the fishermen’s lives.

But the film has monsters too that cannot be represented so easily. I am reminded of Amitav Ghosh’s The Great Derangement, a landmark work on climate change in literature. In the book, Ghosh reckons with the question of why the genre of literary novels has found it so improbable to narrate the extremities of climate change. Similarly, the short film genre presents its own obstacles—in terms of length and the audience’s demand for visual intelligibility—when attempting to represent what is essentially a problem of non-human scales, for example, a nuclear fallout. What Luzon does is exploit the genre’s limitations and interrupt the human drama with an abrupt, almost violent interruption of the non-human. If the intrusion of the non-human (representing an ecological disaster as much as it does the swallowing power of big nations) at the film’s ending negates the very human drama we as affective viewers are invested in, Chiang must not be accused of being lazy. He is literally representing the un-representable, or in Ghosh’s term the unthinkable. It is so unthinkable that the titular song, 海中網 (literally: a net in the sea), sings sweetly at the end to paper over the disaster with a snarky irony.

“I can’t show you the actual thing happening out there, but I’m showing you why we can’t talk about it, and what happens when we talk about it,” Chiang explains the kind of intervention his film contributes to our understanding of the matter at hand, how our shared ecological future is “more important than just bickering about territory.” He even describes the film’s 180-degree genre turn as “an act of protest”. In Chiang’s estimation, a bigger budget would have allowed him to fully flesh out a feature film that works as an environmental parable in the vein of Ishirō Honda’s Godzilla (1954). However, his short film’s compelling interrogation of its genre conventions must already render Luzon a tongue-in-cheek Godzilla in miniature—apt for our nuclear times.

When asked to comment on the reception of his film in Taiwan, the self-aware Chiang replied, “The film feels like somebody is trying to make some forecast like a mad prophet.” And mad prophet he is—when few Taiwanese audience members find the nuclear problem in need of any urgent translation to their reality, even as they recognise the geopolitical stakes. As close as it gets to being in the eye of this ecological storm is Chiang’s story to the Philippines and Southeast Asia. After all, Chiang reiterates to me that, in terms of nationality, he can only observe and comment from the sidelines even as the sea forces us to re-think our understanding of boundaries. “I’m not a Taiwanese filmmaker, but the geographical location where I’m in allows me to look at what is happening in the Northern side of Asia and Southeast Asia. These two are not as separate as we think,” Chiang shares when I ask about what he expects from the Southeast Asian reception of the film. If anything, Chiang’s continued interrogation of Southeast Asia’s relationship to Taiwan—a preoccupation of his ongoing short film cycle—will continue to shed light on regional interdependencies and the human lives afflicted by these dynamics.

“There is no way to separate the political from the everyday life,” Chiang aptly condenses his film-making philosophy, “it trickles down to every facet of your being.” Every frame of Chiang’s Luzon drips in that political stream, up to the purposefully empty credit list. What stories remain untold because of sensitivities we dare not breach? If we look beyond just the computer-generated imagery, how tough it was to film on sea, or the 4:3 aspect ratio—we might begin to hear something. The mad prophet’s cries turned into a nuclear reactor’s laughing. A monster of our own making. The futility of our current bickering.

—
Luzon screens on 8 December, Saturday at 4.30pm as part of Programme 4 of the Southeast Asian Short Film Competition. 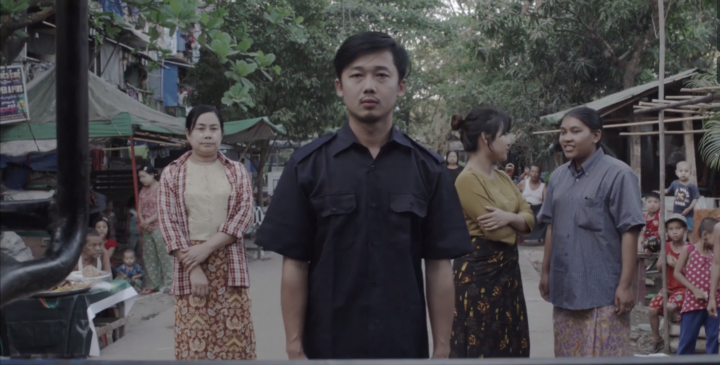