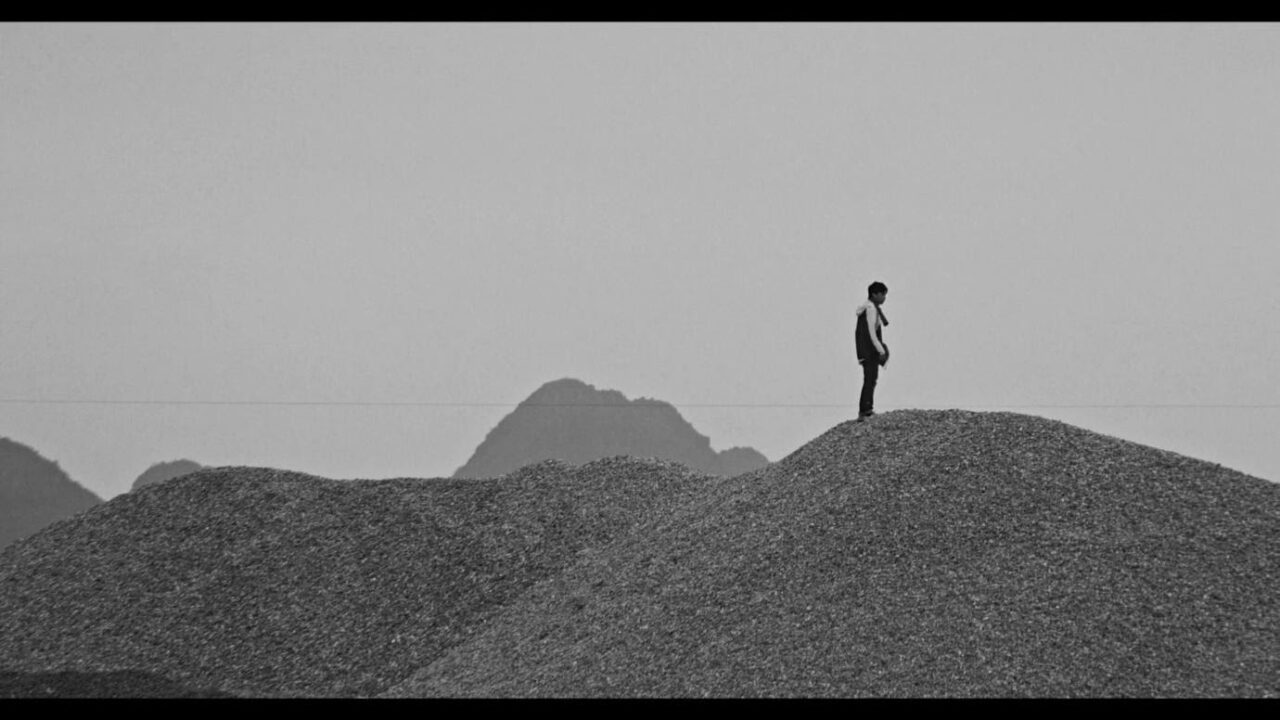 An alien lands on Earth in search of aid in rebuilding his home. Disguised as a human boy, he wanders through the wilderness around a massive temple that is being built. Along the way, he encounters a few characters, including a lonely man bringing an offering of fruits and a chicken to a medium. The Medium performs a ritual to summon the spirit of the old man’s wife. In tears, he holds her head to his chest and asks when he would be able to take her home. The alien watches, as though beginning to see that this search for connection and belonging is something he shares. Directed by Ostin Fam, Bình is a film about the persistent and difficult quest for home.

The Boy’s purpose is to help complete the aliens’ mission, described in text in the opening of the film. This quest to rebuild their home is one that is never depicted, part of a thread that is not substantially developed narratively. Rather, with minimal story elements, archetypal characters, and spare setting, the film has a sparse character that allows it to unfold like a fable. Presented primarily in monochrome, the scenes are quiet and beautiful. There is little outside the sounds of nature and construction work, the textures of leaves and rubble, almost as if the natural landscape, the temple, and these few human lives form the measure of this world. Deftly employing this spare quality, Bình focuses on the Boy’s journey and what he comes to understand of his quest.

Spaceships and aliens, distant inhabitable planets, the technological fantasy of rebuilding a planet—these narrative tropes can seem incongruous with what is essentially not a science fiction film. Yet, the clever use of this premise introduces critical distance for the protagonist and also foregrounds the outsider nature of the protagonist. This sense of alienation is not exclusive to the Boy, however. Bình teases at a universality to his longing for a home. In some of the dream scenes, differentiated by their softer image quality and a blue tint, the Boy wanders through the woods, encountering the Medium. He wonders how the woman was able to get in touch with them, but perhaps the prophetic nature of the dream simply hints at a greater cosmology and a deeper thematic connectedness—the alien is not merely an outsider; his quest for a home is one shared by these humans.

When the Medium is revealed to be a charlatan at the end of the film, bringing the fruit offerings and chicken soup to the Driver, their conversation takes a cynical turn. The Driver asks the Medium about the spirits she is supposed to have summoned or the gods she may have offended. She laments that the spirit of the Lonely Man’s wife may be around, but retorts that starvation is the only thing to be afraid of. Their words are resigned. There will always be trucks to fix, always be temples to build, always be men—victims—trapped in grief and longing. We are always searching for human connection, for home.

Indeed, it is telling that the Lonely Man’s first instinct when interacting with the Boy is to ask if he is troubled by love. As he lights up the pipe in his hands, he says: “Either old or young, love hides in a pipe. We like to smoke it. No doubt we’re so high.” The pipe has passed through the hands of different people before making its way into him—all humans partake of and cannot extricate themselves from the tangles of love. This symbol lingers as the Medium performs the ritual to summon the spirit of the Lonely Man’s wife, with trails of incense smoke rising through the air.

The search for home unites these characters. This search is our Sisyphean task, the perpetual work of not only finding home but also building it. The aliens note that on this planet, the buildings “are built to keep the Gods”. We have monumentalised our search for a place in the universe. What is religion, after all, if not a way in which we understand how we inhabit the natural world and our mortal lives? In other words, that we continually build temples, that we continually search for love, is an unavoidable outcome of living.

Home, however, varies from character to character. Bình underlines this by trading in overlaps of experience and meaning. This is most clearly demonstrated in the recurring image of the chicken. To the Lonely Man, it serves a religious or ritualistic purpose. When its foot is compared to a craggy mountain, or when one of the caged chickens is freed and cradled in the Boy’s arms, a connection is drawn to nature. In the final scenes where the Medium brings fruit and chicken soup to the Driver, the chicken has become food, passing from symbolic function into biological purpose.

Such carefully constructed indeterminacy can be seen throughout the film: the conflation of nature, spirituality, and sustenance in chicken; the overlapping images of smoke arising from the pipe and the incense; the juxtaposition of a spaceship mentioned in text against the image of a hot air balloon; and indeed, a planet much like another, yet different. Even the title of the film takes on a double meaning. It would be fair to suppose it is the Boy’s name, but it is also a reference to the director’s brother.

The film destabilises boundaries as it interrogates the definitions of home. That is, Bình reveals how the boundaries of home are constructed and ambiguous, and that the quest for home necessitates a constant process of searching and building. In the text at the film’s end, the Boy learns that the spaceship may have left without him and he can no longer return to his own planet or his own people. Like a ghost returning to the mortal world, the Boy must embrace a new definition of home. He travels down the dusty path, following behind the Driver, who is in his truck being towed down the path. As colour bleeds into the image, the Boy steps further into this world, embracing a new land or perhaps our commonality, the beginnings of a relationship with a new world, a new idea of home.

Perhaps this too is our condition. We always come at it as aliens, perpetually seeking to make sense of the world around us and to find a definition of home that enables us to belong. The Boy’s sense of foreignness reflects our own sense of alienation, as we too continually navigate the challenges of this absurdist existence. Bình is thus an accomplished short film that traces the difficult process of locating home, as we construct and reconstruct, define and redefine our place in the world.