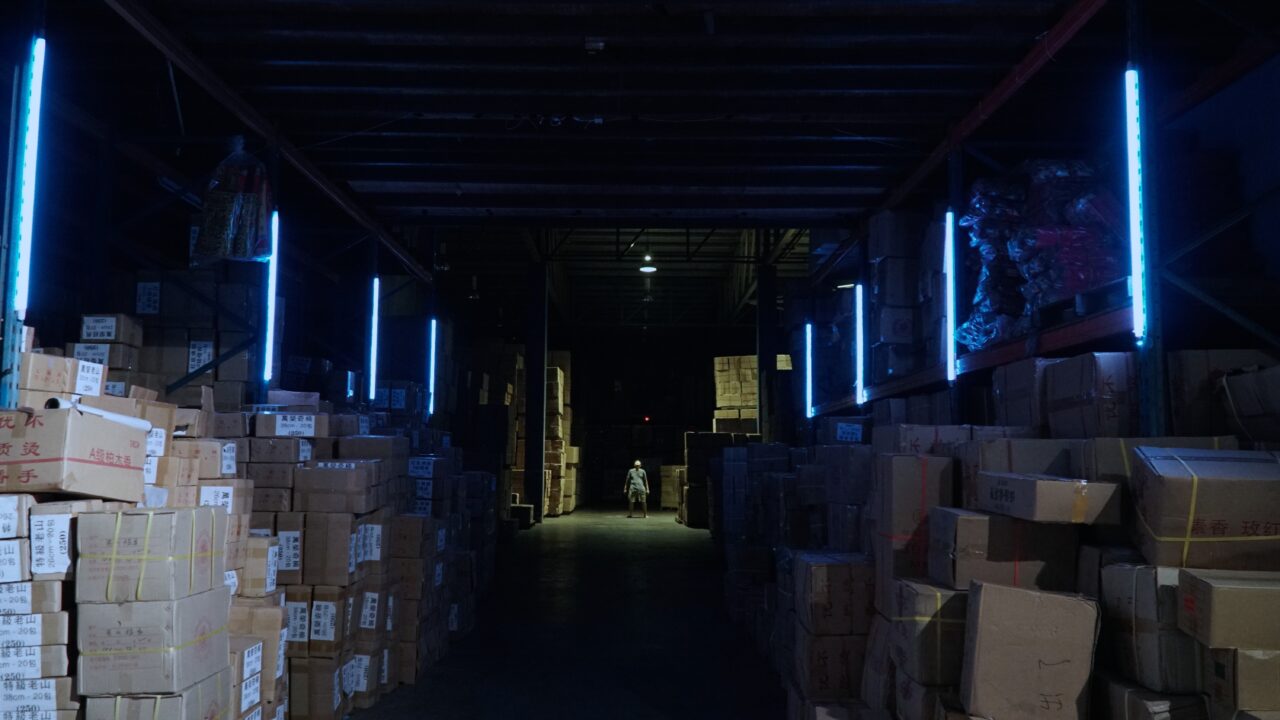 Here Is Not There

Grimy corridors, cramped dormitories and unwelcoming warehouses provide a spatial frame for director Nelson Yeo to explore the various tensions and contrasting worlds that transient, low-paid workers grapple with. Here, a male Malaysian worker (Hong Yu Yang) and his colleague from China (Bobbi Chen) offer an entry into these bodily, class, and spiritual anxieties. What choice – if any – exists between home and host country? What values do bodies serve: mere conduits for profit, or the site of intimate, personal realms of experience and feeling? Amidst everyday conditions of precarity, how separate are the worlds of the dead and living?

The film opens with two paper effigies being transported on a truck. A dark-skinned, presumably South Asian, construction worker, and a mop-toting, songkok-wearing Malay cleaner are starkly racialized characters, their painted eyes staring blankly into the camera. Paper offerings are a frequent sight, especially within the Hungry Ghost Festival when the short is set. Burnt for the deceased as a ritual of ancestral worship, they have become a common expression of filial piety, a gesture of material and spiritual comfort for souls of the departed to enjoy in the afterlife.  Yeo atunes us to the visual spectacle of burning: a more material, fetishistic, and one-way form of communication with the dead, the interstitiality of this process further emphasized by the empty roads and eerie tunnels that play witness. Yet, offerings are more conventionally stacks of joss-paper money, cars, or other everyday comforts of life. Burning these caricatures gestures towards a form of modern bondage of the dead, a reproduction of Singapore’s own labour hierarchies in the underworld. Unfortunately, Yeo seems largely agnostic towards these metaphysical, spiritual questions, opting to silently revel in the sheer visuality of flickering flames and floating ashes.

The duality of the spiritual and material world is achieved by returning to concrete, tangible space. Golden Mile Tower, a building of sleeping shops and dimly-lit corridors, is surely a familiar sight to any Singaporean cinephile, for it hosts beloved independent cinema The Projector. Now depopulated, it is somewhat uncanny, a space to be haunted by our two living characters. “Strange, there’s not even a ghost in sight here”, Hong jokes. Chen retorts that it’s “not funny”. For many, the Hungry Ghost Festival is a month where vengeful spirits are rumoured to escape the underworld and walk amidst the world of the living. No such ghosts appear throughout the film – not literally, at least. However, Yeo suggests the ‘real world’ and its shadow often overlap, and Hong and Chen brush against this underworld in many ways.

The cinema’s hallways, where they deliver the effigies, might be a well-known sight for some. Yet, Golden Mile Tower’s backrooms and loading bays are not – instead they serve as a reminder of the busy, sweaty, and laborious co-existence of workers.  Nelson’s choice of setting is thus a powerful affirmation that the film’s characters share the same physical world and society of Singaporeans, even if their experiences might depart from the cosmopolitan outlook and socioeconomic position of the average Singaporean film festival-goer. I personally know the building’s carpark as a smoker’s post-movie hangout, but Yeo now transforms it into a backdrop of skeletal buildings and construction cranes by night.

Amidst the harsh straight lines of modernist architecture, and an intimidating, blinking city skyline, any human would seem small. The film’s central conversation takes place here. Against the resolute concrete there is talk of the metaphysical, prompted by Hong and Chen’s own conversation with the ‘other’ – South Asian and Southeast Asian workers, who ambiguously occupy a position even lower in the social and economic strata than then. “Comrade”, Hong sarcastically addresses an effigy earlier on: now he describes “them” as “modern slaves for Singaporeans”. She is doubtful: “Are we not the same as well?” The negotiation of their status continues, between two tiny individuals dwarfed by construction and the dark sky.

An earlier encounter with a movie in an empty cinema hall serves as another prompt. Footage of jellyfish and quivering blue light is accompanied by a narrator’s booming Mandarin, explaining that “jellyfish are important free-swimming animals in aquatic ecosystems”. Hong idly wishes to be able to clone himself like jellyfish can, if only to work two jobs and provide for his family. Talk of money and the material instead dredges up more abstract memories for Chen: in a dream, she split herself into two – “one was here, the other was there… Time was a little different, too”, slower yet familiar. Fear catching in her voice, she describes slowly forgetting and settling into Singapore too, a city distant in space, time, and rhythm from her hometown. She hates it here, she confesses

Here, Yeo opts for a close-up shot as Chen begins to exchange their aspirations and worries: two vulnerable, yet distinctly human individuals share a kiss. Ostensibly this is a romantic scene, albeit interspliced with shots of used condoms that remind us of the intensely physical, carnal act of sex. Yeo has no desire to bare their bodies to the world, content to characterize this relationship through kisses illuminated by streetlight and enveloped in a still, quiet night.

Domestic affection now punctuates their laborious existence, and amidst a dinner of instant noodles Hong charmingly presents to Chen a light-up tank, with two jellyfish within. This gift is a symbol of love, and perhaps a reminder of their shared memories in the cinema. Yeo expertly recreates the blue light bathing the cinema through out-of-focus closeups on the tank, taking the two out of their dingy kitchen and into an ethereal, otherworldly space. For a few moments, it is as though consciousness and existence melds into these seemingly-immortal, asexual-yet-reproductive creatures. It provides Chen a moment of reflection. Light modulates between different colours – electric blue, deep purple, a warm red – as she, too, seems to contemplate the changing worlds she occupies. Her eyes, the window to the soul, seem impenetrable, but we can muster a guess: her new relationship, contra the static nature of her employment, dwelling, and perhaps wages. What has she forgotten? What has she gained?

However, I wonder if Yeo successfully balances the intensely personal nature of romance with his efforts at a wider socio-economic commentary. The only time the camera’s gaze moves beyond the two main characters is when it travels from the building’s carpark to its interior, to cast a spotlight on other menial jobs. “Whatever jobs that Singaporeans don’t want is an opportunity for us”, explains Hong’s disembodied voice over sympathetic shots on security guards, flyer pushers, and toilet cleaners. These characters – distinct and common in the sights of their uniform, or the clacking sound of mailboxes – are well-trodden shorthand for an underpaid, underprivileged underclass.

Yet this group is conventionally populated by older Singaporeans, and in contrasting them with the lived experience of service workers from China or Malaysia, it runs the risk of being ambivalent to a wider group of transient, poorly-paid and precarious workers. Even as generalized ‘class’ or migrant struggles form the oppressive superstructure, Yeo is ultimately interested in a dimension of personal conflict. The communities that the effigies caricature are unvoiced, and largely unrepresented within the short.

Only a single walking scene, filmed in Little India by night, features South Asian transient workers, who curiously peer at the cameraman and weave in and out of the shot. The well-known enclave provides a bustling backdrop of mostly male bodies, against which the cast is differentiated on gendered and racial grounds. This moment, conspicuously shaky amongst the short’s many well-stabilized scenes, might very well be the product of the short’s practical, technical challenges. Nonetheless it is symbolic that when its characters are cast into a lively, albeit different world, populated by a community different from them, the filmic visual itself is destabilized. Yet, these other marginalized groups exist only on the film’s visual peripheries. Narratively, Yeo focuses this scene on Chen’s revelation of her pregnancy. Bridges between the worlds of different workers are not built.

In what is perhaps the film’s largest tonal shift, Hong’s consciousness itself is suppressed and intoxicated. Certainly he exists, but here he scarcely lives. The camera smoothly and impersonally tracks him as he stumbles, drunk, back into the dark, unwelcoming warehouse where he works. His body traces a dispassionate dance, an untethered, detached performance, and the short’s fantastic sound design now turns to funerary chanting for its backing track. The sound conjures up my personal memories of white-clad Chinese funerals: as if one denying physical reality must now commune with the dead. The music swells – nearly to a crescendo – and he collapses, passed out.

Are we back in the world of the living? There is a brief domestic moment, of Chen washing his face in their cramped dormitory, but it is a moment that is now uncomfortable, and foreboding. Later that morning, she wakes up. The jellyfish are ever so small and fragile, ever so dead, amidst pieces of their shattered tank on the grimey floor. I think of amniotic fluid and watery births, but there is absolutely no new life to be found, now. There is only the humming of the fan and Chen’s repeated murmurs, as she prepares to break the news to her boss. “Not funny … not funny”.

What is not funny, but instead harsh and callous, is her boss’s insistence that she will have to be deported. Against Chen’s echo of “not funny” is the cold refrain that there is “no exception, no exception” to the law. The actress plays the unmoved personification of inflexible labour laws and private business interests well. It is not a negotiation, nor is there the time nor energy to plead, as Yeo introduces another tragic complication to the narrative.

Death, so often foreshadowed in the film, is imminent. Chen, hit by a forklift in the warehouse, is unsuccessfully treated by his coworkers. Yeo switches to mobile phone footage to depict this awful scene – blood spurts from a lolling head, and a slow zoom onto Chen’s face captures the sense of a shrinking world. There is no time nor energy to plead. “Not funny, not funny”. By now it is an echo, and the first daybreak in the film brings little promise. Colours in the scene wash out, just like hope.