Closing Off the 26th Edition 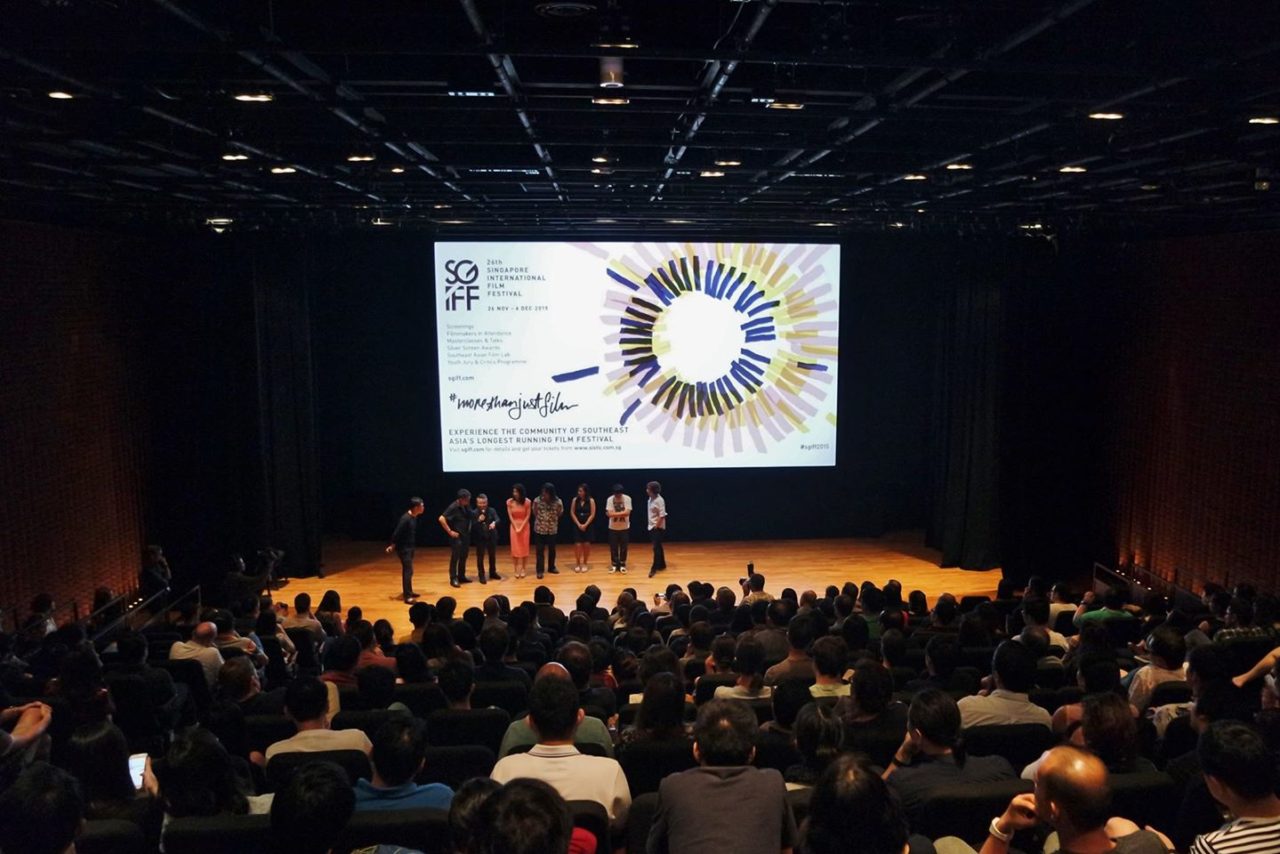 Closing Off the 26th Edition

After 11 days of films and more, the 26th edition of the Singapore International Film Festival has come to an end. Check out our highlights below and relive some memorable moments that happened throughout! If you’re more of the visual sort, you can check out our gallery recaps of the Opening Weekend, Middle Week and Closing Weekend.

Explore, Discover: 12,000 people in attendance, 14 sold out screenings
Five of the 14 sold out screenings are of local films, ranging from the Classics section (Eric Khoo’s Mee Pok Man and Yonfan’s Bugis Street, both of which celebrated its 20-year anniversaries this year) to Khoo’s latest feature In the Room, and debut features from Green Zeng (The Return) and Eva Tang (The Songs We Sang).

Other than homegrown films, sold out screenings also include those that have garnered international acclaim. There are those with star-studded casts: the Cannes Jury Prize-winning The Lobster, starring Colin Farrell and Rachel Weisz (and a host of familiar names in supporting roles) and The Man Who Knew Infinity, starring Dev Patel and Jeremy Irons, both sold out. As did Chinese filmmaker Jia Zhangke’s Mountains May Depart, itself in competition at Cannes, and Cemetery of Splendour, Thai filmmaker Apichatpong Weerasethakul’s first film in three years.

Summing up the sold out lists are How to Win at Checkers (Every Time) and several films under our special Focus section on Chinese independent documentaries: Cotton, When the Bough Breaks, and more.

Learn: Masterclasses, Talks, In Conversations
There were so many opportunities to learn from the pros at this year’s SGIFF. The Masterclasses featured regional cinema icons Brillante Mendoza (Philippines) and Apichatpong Weerasethakul (Thailand), this year’s Honorary Award recipient Mohsen Makhmalbaf, and renowned producer/John Woo collaborator Terence Chang.

Three In Conversation sessions were held with the director and cast of Eric Khoo’s In the Room and The Man Who Knew Infinity (with director Matthew Brown and Dev Patel), as well as with our Cinema Legend Award recipient Michelle Yeoh on the last day of the Festival.

There were a total of seven Talks, all focusing on diverse topics. There were panel discussions on Mexican cinema and Chinese independent documentaries, coinciding with their respective Festival sections. Those more interested in the technical side benefitted from a session on digital distribution, featuring Peter Gerard of Vimeo; another on digital workflows, with our Official Technology Partner, Mocha Chai Laboratories; and one on creative rights, co-organised with the Motion Picture Association.

There was also a special tribute to the late Tony Yeow, a renowned figure in Singapore cinema, and Actors Unscripted, co-organised with Pure Talents, where participants can learn from actors Yeo Yann Yann, Chen Tian Wen and Chen Tianxiang.

Southeast Asian Film Lab
Back for its second year is the Southeast Asian Film Lab, a six-day story development lab featuring 11 young filmmaking talents from seven different countries across the region. The participants were mentored by head Terence Chang, Yong Mun Chee, and Sherad Anthony Sanchez, with a host of special guests along the way: Patrick Frater of Variety,

The film lab ended with a pitch in front of an industry jury, who would then present the Most Promising Project award—a $5,000 prize presented by Anthony Chen’s Giraffe Pictures. This year’s Most Promising Project goes to Auntie, by Singapore’s He Shuming, about a Korean drama-obsessed widow learning to find her way home after getting lost on her first trip abroad in Seoul.

Find out more about all 11 projects here!

Engage: filmmaker Q&As
A hallmark of any film festival, various filmmakers were in attendance at their films’ SGIFF screenings, giving audiences an opportunity to interact with them directly. Special Q&As include that of TPE-Tics, which was followed by a performance from the film’s subject, eccentric musician Huang Dawang; as well as that of They Will Have to Kill Us First, attended by the film’s subject, Malian blues rock band Songhoy Blues, who happened to be in Singapore for a concert.

Headed by May Adadol Ingawanij, among the guest mentors are established film critics such as John Lui of The Straits Times, with whom the young critics had lively debate about evaluation criteria, and Maggie Lee of Variety. Before choosing the Youth Jury Prize-winning short film (Three Wheels by Cambodian filmmaker Kavich Neang), they also had a chance to learn from Gertjan Zuilhof, from the programming team at the International Film Festival Rotterdam.
The programme culminated with six issues of Youth Meets Film, a live film journal published during the Festival. The young critics watched every single in competition short film, went up close and personal with the filmmakers, and churned out six issues of about four articles each. Read their articles here!

Silver Screen Awards: celebrating the best of Asian cinema
The Silver Screen Awards this year is held at the MasterCard Theatre, Marina Bay Sands, and hosted by comedian Chua Enlai. The Best Asian Feature Film award went to Gurvinder Singh’s The Fourth Direction, a drama set during the historical conflict between Sikh separatists and the military. The jury citation reads: “Through a masterful execution, the film makes us experience the fear and tension of the era and how the political situation is influencing the life of this family.” This marks the second consecutive year that an Indian film wins the Best Asian Feature Film award.

Special Mention goes to Tikkun, an Israeli drama about a man challenging the rigid rules of his Orthodox Jewish community after a near-death experience. The jury cites “the director’s ability to guide us seamlessly through the complexities of the character’s spiritual journey.”

The big winner from the Southeast Asian Short Film Competition is Indonesian filmmaker Lucky Kuswandi, who won two awards—Best Southeast Asian Short Film and Best Director—for his short film The Fox Exploits the Tiger’s Might. The jury citation reads: “With strong visual language and a deft use of sexual tension, the film provokes discussion surrounding the issues of race and repression.” Kuswandi’s latest feature, In the Absence of the Sun, was also the Closing Film at last year’s SGIFF.

The Best Singapore Short Film award goes to My Father After Dinner by Gladys Ng, lauded as a “fresh take on everyday life.” Phuttiphong Aroonpheng of Thailand wins Special Mention for Ferris Wheel, about a mother and son dealing with smal injustices as they leave Myanmar for a new life in Thailand.
Also presented during the Awards are the Youth Jury Prize, presented by the participants of the Youth Jury & Critics Programme, and the Most Promising Project, presented by the jury from the Southeast Asian Film Lab. Winner of the Youth Jury Prize is Three Wheels, by Cambodian filmmaker Kavich Neang, whereas the Most Promising Project goes to Auntie by He Shuming of Singapore.

Participate: Audience Choice Award
In keeping with the Festival’s focus on the film-loving community in Singapore, one of this year’s new initiatives is the Audience Choice Award. Open to all feature films, we asked for YOUR vote: which film is so good that everyone should watch? After a tight race, the winner was Sailing a Sinking Sea!
Our mission is to celebrate films big or small, and we were so heartened that a film like Sailing a Sinking Sea — about a disappearing seafaring community in Southeast Asia — garnered top votes. It shows that even unique, experimental films from the Imagine section, those with nontraditional narratives, were able to connect with our audience.

Last day of the Festival
Another new thing we’re trying this year: instead of a closing film like years past, the last day features two screenings: first of The Fox Exploits the Tiger’s Might and The Fourth Direction, winners of the Best Southeast Asian Short Film and Best Asian Feature Film respectively; and second of My Father After Dinner, which won Best Singapore Short Film, and Sailing a Sinking Sea, which won the Audience Choice Award.

It was a great Festival, and we’d like to thank our partners, sponsors, volunteers but most of all, all of you who attended the Festival, for making SGIFF possible. Our Executive Director Yuni Hadi said: “SGIFF has always been a magical and inspiring experience for me, and our team constantly finds ways to excite, engage and grow our film community. We hope to continue building a platform that allows people to not just come to watch film, but to also expand their conversations and perspectives on film and filmmaking in Singapore and Asia. Through this year’s Festival, it is evident that pride and interest in independent cinema is growing, and that is what we hope to continue to encourage in the years to come.”
Here’s to 2016!